The crowned eagle (Stephanoaetus coronatus) is one of Africa’s apex predators that can be found in tropical forests across Africa, but reaches one of its highest densities in the greater Durban area and around Pietermaritzburg, KwaZulu-Natal, South Africa. A large eagle in downtown Durban is quite an exceptional thing. It feeds on prey like vervet monkeys, duikers or rock hyraxes, occasionally young eagles also prey on people’s pets, cats and dogs, which can get them into conflict. Scientist Dr. Shane McPherson and his colleague Dr. Petra Sumasgutner have been doing research on these eagles for many years, trying to reduce conflict potential between the raptors and humans. They give talks and organize public chick ringings in order to involve the people, getting them interested for conservation work. Crowned eagles can act as a flagship species to help preserve their habitat – the remaining tropical forests - and many other species, that also depend on these forests.

The crowned eagle (Stephanoaetus coronatus) is one of Africa’s apex predators that can be found in tropical forests across Africa. Interestingly, it reaches one of its highest densities within residential gardens and urban parks in the greater Durban area and around Pietermaritzburg, KwaZulu-Natal, South Africa. The large eagles are actual city dwellers, quite an extraordinary aspect in their curriculum.
These powerful eagles have adapted well to the presence of humans, thriving close to settlements, where they use sturdy trees for breeding and raising their chicks. The lack of native trees in some areas doesn’t bother them, as a subsitute they also nest on introduced eucalyptes or pine trees.
Physically they belong to the strongest eagles, which is well depicted by their choice of prey. Whilst most of their prey items are between one and six kilograms heavy, they also regularly prey on eight to twelve kilogram weighing mammals. With their huge claws they go after vervet monkeys, duikers or rock hyraxes. Inexperienced young eagles might also prey on people’s pets. Cats and dogs, however, only account for about one per cent of all prey taken by the eagles.
Nevertheless, if incidents like these occur, media reports intensively or as Dr. Shane McPherson and Dr. Petra Sumasgutner put it: „The eagles provide food for conflict.“ Over the past ten years Shane McPherson – accompanied by Petra Sumasgutner – has invested much work and sweat into studying and monitoring these powerful forest raptors.
Their work reveales that crowned eagles are able to flourish close to human settlements, provided that there is acceptance and tolerance by humans. In order to keep the potential of conflicts low the scientists invest much effort and time in involving the public, they foster good relations with property owners who have crowned eagle nests on their grounds, give talks and organize public chick ringings. At the age of roughly 60 days the young eagles get a ring, that identifies them for the rest of their life, around one of their ankles. Many people who get the chance to see these stunning birds up-close within this context, leave from the „event“ with a lasting experience, some of them becoming advocates for wildlife, and besides attentively watching the birds right from their living room window also spreading the message about how coexistence with raptors works.
Actions like these are crucial for the longterm survival of the species. As young birds fledge and spread their wings, they head off to find new territories, occasionally coming across easy prey like pets and thereby testing the tolerance of humans. The more people know about the species, the better coexistence can work, the greater are the chances of survival not just for the eagles but also for other urban dwelling species in the remaining tropical forests, in and around the cities. Tropical forests are crucial ecoystems that are vanishing at rapid speed. Flagship species like crowned eagles can help preserve these habitats and the many species dependent on them, including humans. 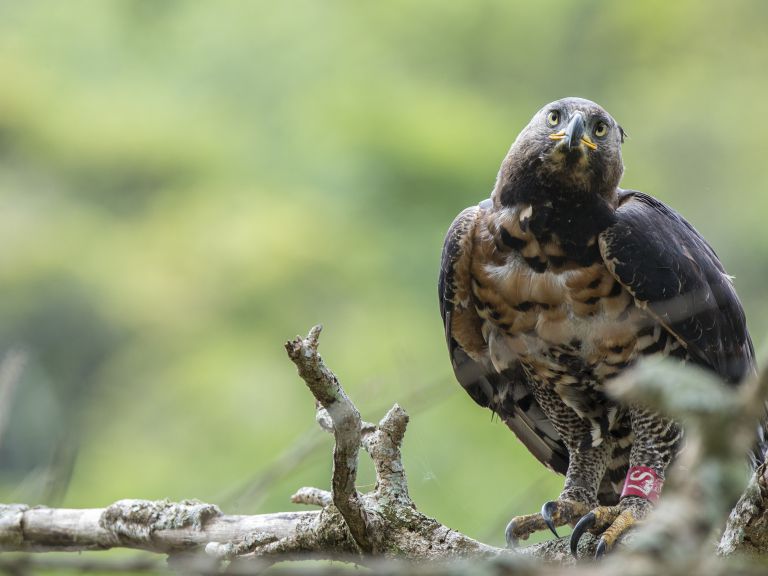 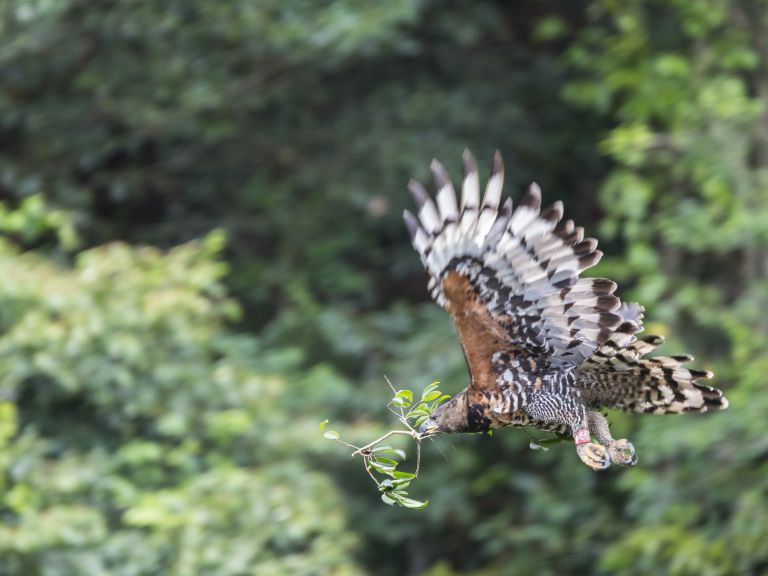 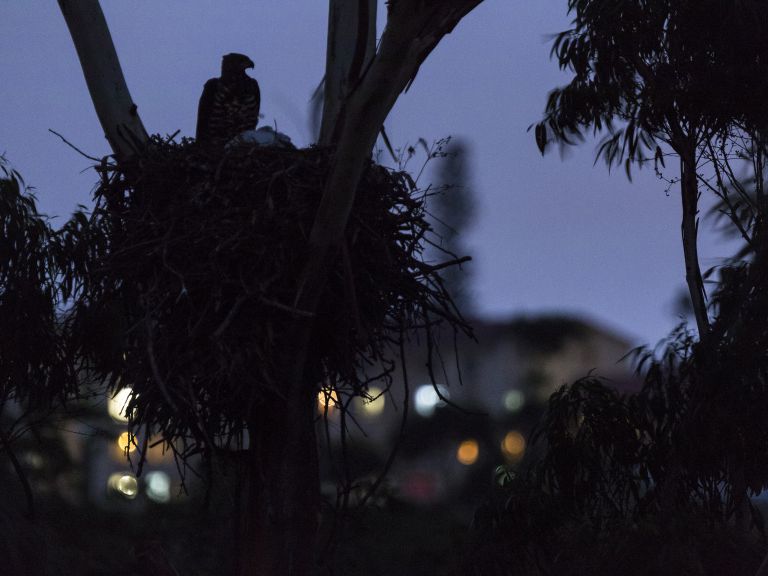 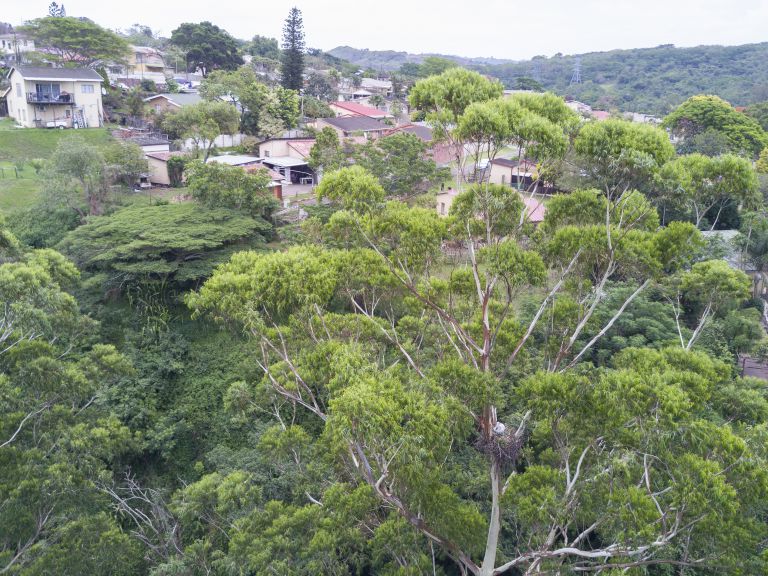 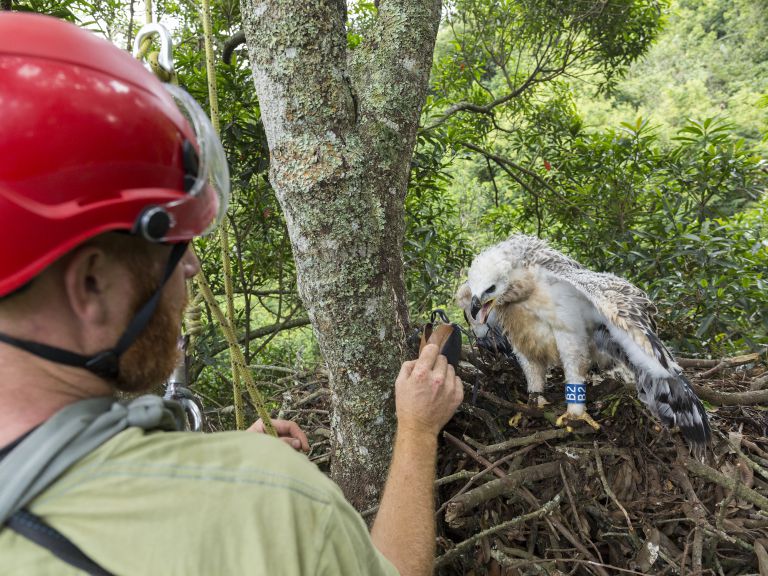 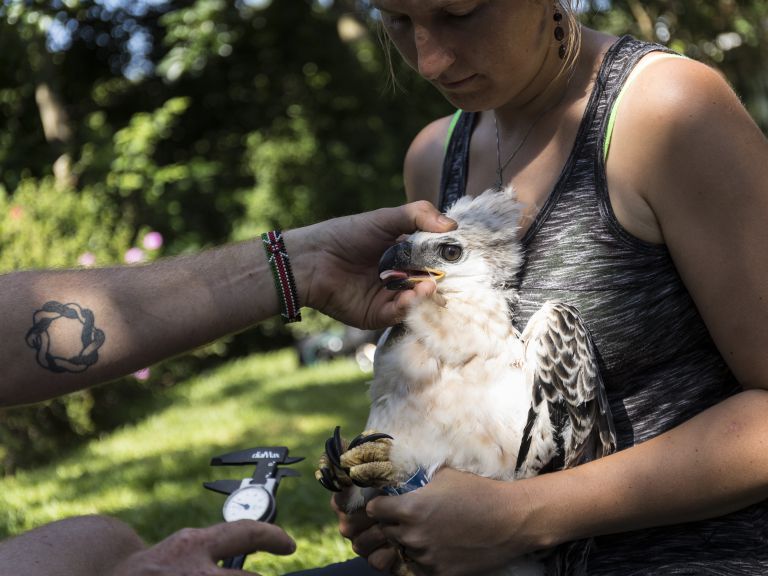 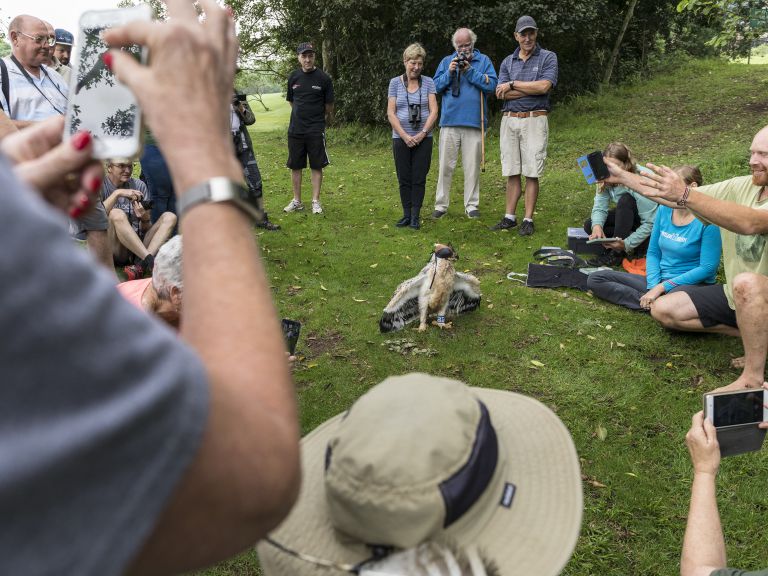 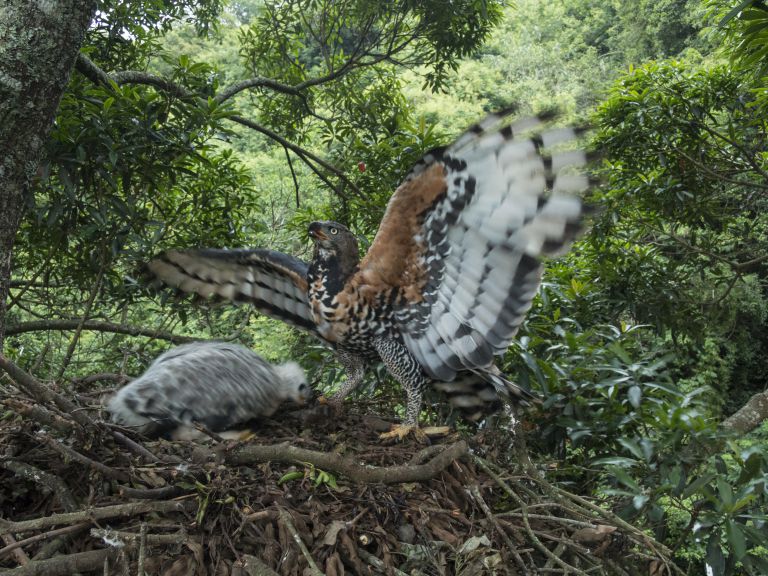 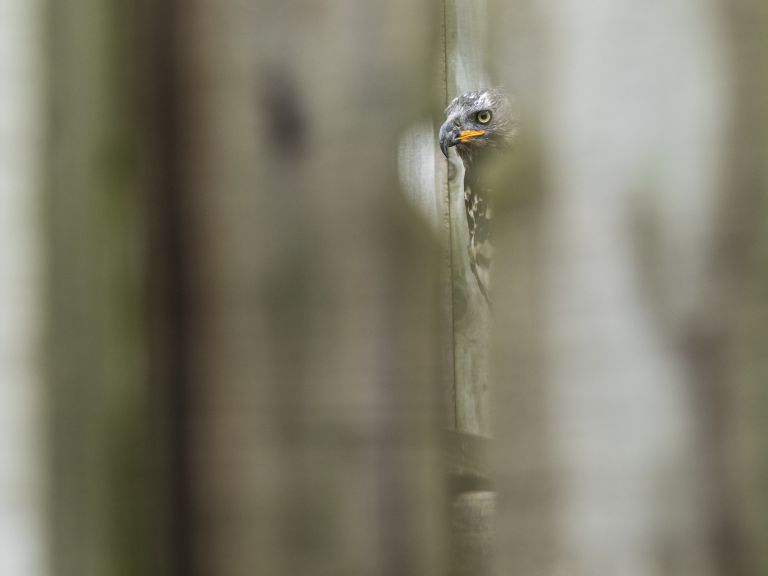 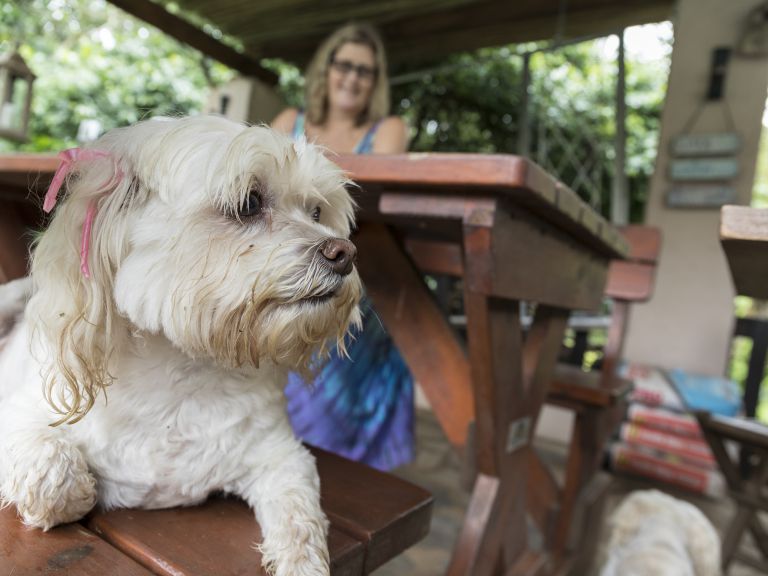 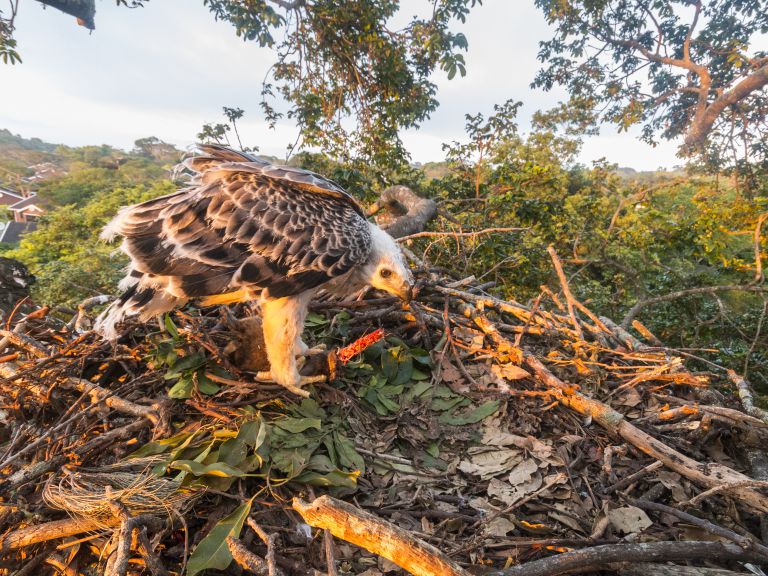 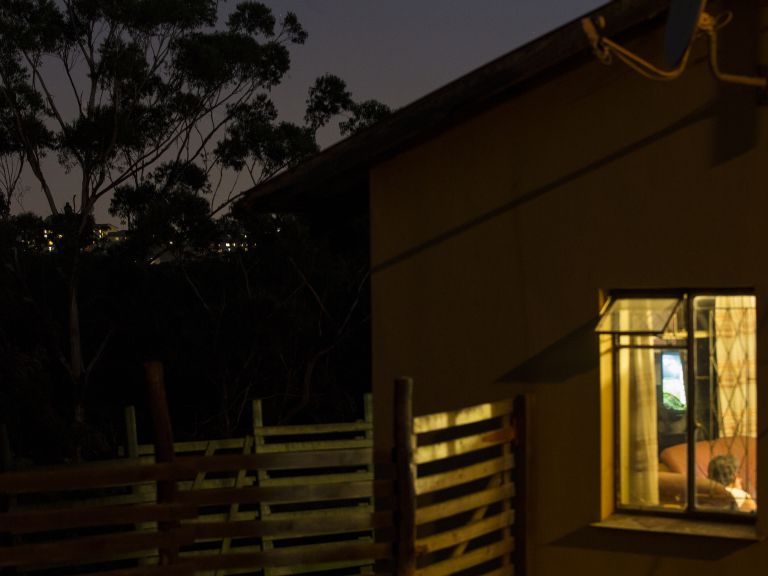