The project “In the Desert of the Aral Sea” is dedicated to the ecological disaster of the Aral Sea whose dehydration has a great impact on the daily life and culture of the people in this region. The Aral Sea lies on the territory between Kazakhstan and the Autonomous Republic of Karakalpakstan which is a part of Uzbekistan.
As the European Radio Liberty has reported, a three-day storm which began on May 26, 2018 affected the Karakalpakstan and Khorezm regions of Uzbekistan. Salt from the dried-up parts of the Aral Sea covered farm fields and orchards with a white layer, destroying many agricultural crops not only in Muinak which is 100 km from the Aral Sea, but also in Nukus, the capital of Karakalpakstan, which is 300 km from the current area of the Aral Sea. The storm also led to the cancellation of flights at the airport of Urgench, created a danger on the roads and caused respiratory distress to many people. Its speed exceeded 72 km / h. Temirbek Bobo, 80 years old, told the Uzbek office of the Radio Liberty that he had encountered such a heavy storm for the first time in his life.“I had seen the wind bringing sand before, but it was the first time I saw salt raining down from the sky. This event can be called a disaster,” said Bobo who lives in the Takhiatash district of Karakalpakstan. “All day long one could see nothing, not even the sun, except for the salty rain." He added: “The nature has begun to avenge on us for what we have done with the Aral Sea.”
A representative of the Council of Ministers of Karakalpakstan, speaking anonymously, said that the Council had not received any instructions regarding the situation, but supposed that the regional Ministry of Agriculture might undertake some measures. However, no action followed. The RFE / RL Uzbek Office failed to contact the Ministry of Agriculture of Karakalpakstan for comments.
In Soviet times, all republics were to fulfill the economic plan. Uzbekistan had to grow cotton in huge quantities. Water of the Amu-Darya and Syr-Darya, the rivers which flow into the Aral Sea, was used to irrigate the fields. Less and less water reached the Aral Sea. Its dehydratation began which caused other problems. Drying out in the desert turned over by 100 degrees, drinking water ran out. All fish factories were closed. If in 1960 fishing catch amounted to 40,000 tons, in the mid-80s it decreased to only 2 tons. Local fisheries simply ceased to exist, more than 60,000 jobs were lost. The most common fish in this area was the black sea flounder, adapted to habitation in salt water in the 1970s and therefore introduced there. But in 2003 it disappeared from the Aral Sea. Many fishermen found themselves without work. People were forced to leave their homes and look for a new residence in order to find a job and feed their families. Today there is not a single species of fish in the sea, only Artemy plankton. Pesticides used for irrigation of fields got into the groundwater.
Since the 1970s the number of gastrointestinal diseases has increased dramatically. Typhoid, paratyphoid, hepatitis and multidrug-resistant tuberculosis spread as well (Doctors without borders). Infant mortality rate equals to 24,1 cases per 1,000 infants during the first year of life (WTO). Low quality of breast milk contributes to this.
Back in the day the Aral Sea coast used to enjoy roaring surfs and listen to shrill calls of seagulls. Sitting on the shore, one could watch ships coming and going. Then people did not know that they would make a vital error. Today the coastline has moved away for hundreds kilometers, having turned the seabed into the salty desert of Aralkum, strewn with white shells reminding of the gone sea. This story is not only about disappearance of the Aral Sea, but also about people whose lives, continuously depleted, are being tested every day.
Waste, sandy, depleted soil is a metaphor. It reflects the state of human soul of the entire population of the region who have lost not only their culture, but also the source of life, water. Salt reminds us of insufferable pain and repentance. All what is left looking at these vast spaces, is the memories and hope that the new generation will be able to change something for the better. I invite you to walk with me along the Aral Sea bed to feel the atmosphere of emptiness, salt in the air and sufferings of nature. 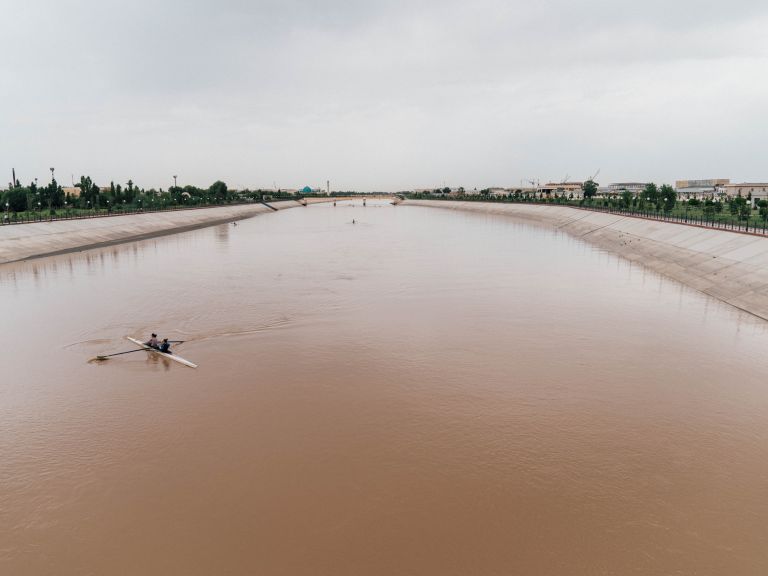 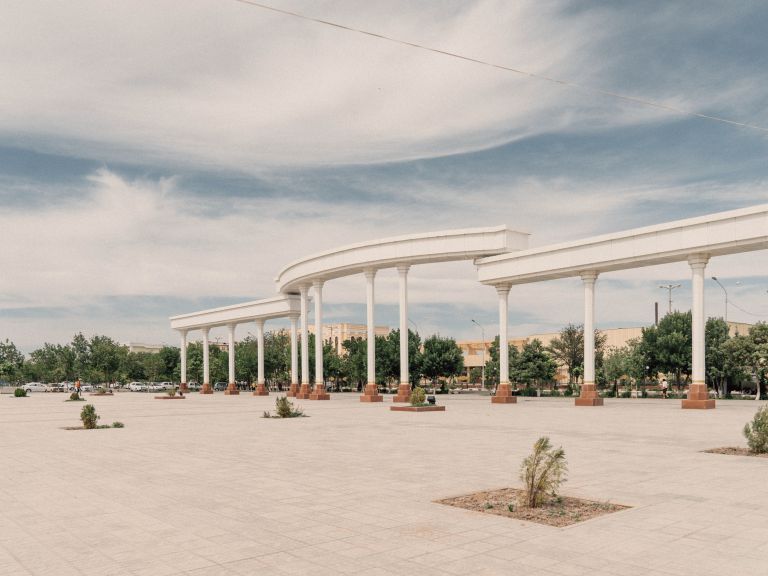 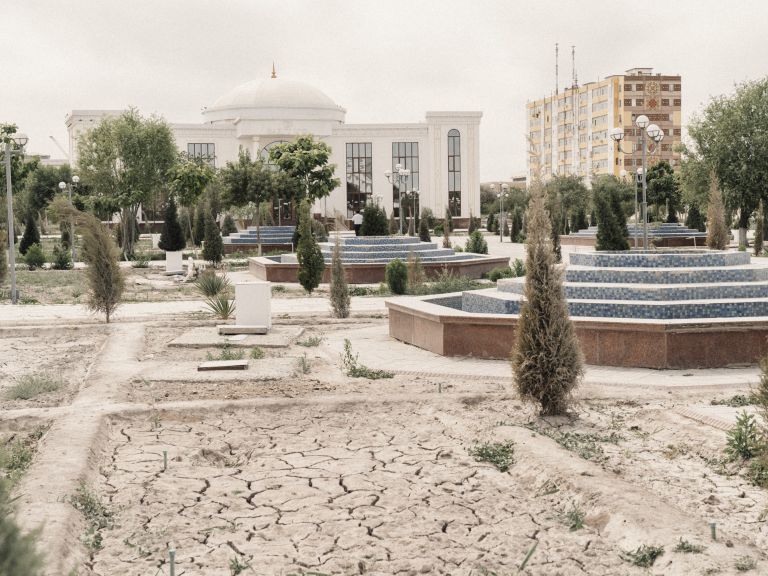 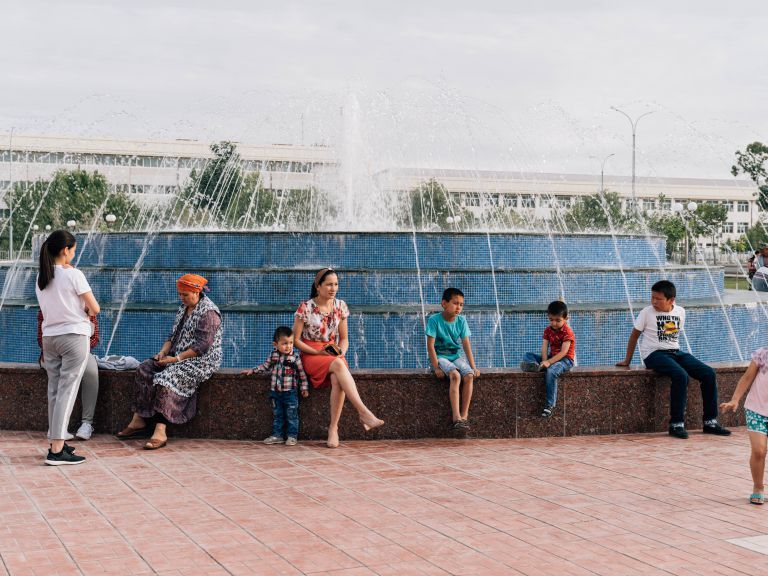 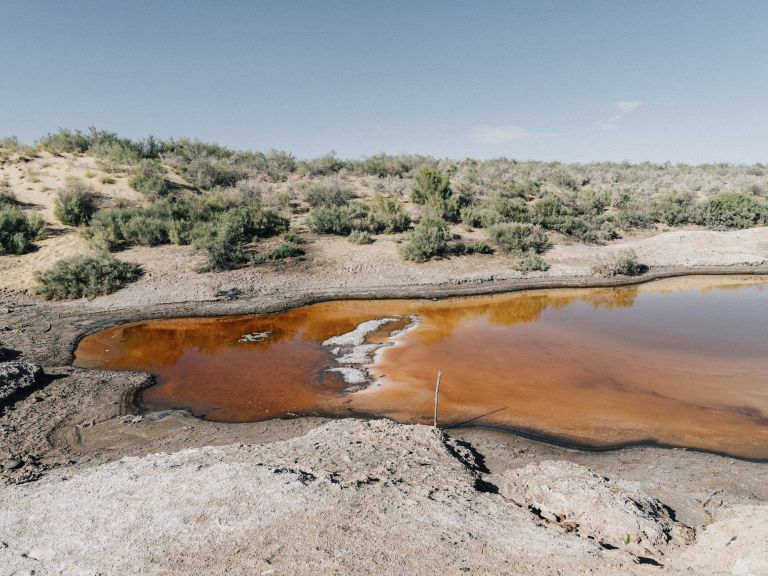 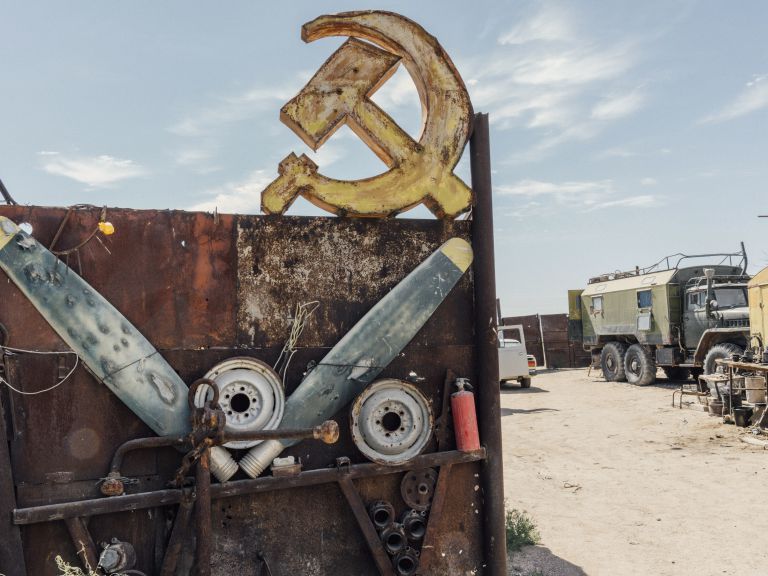 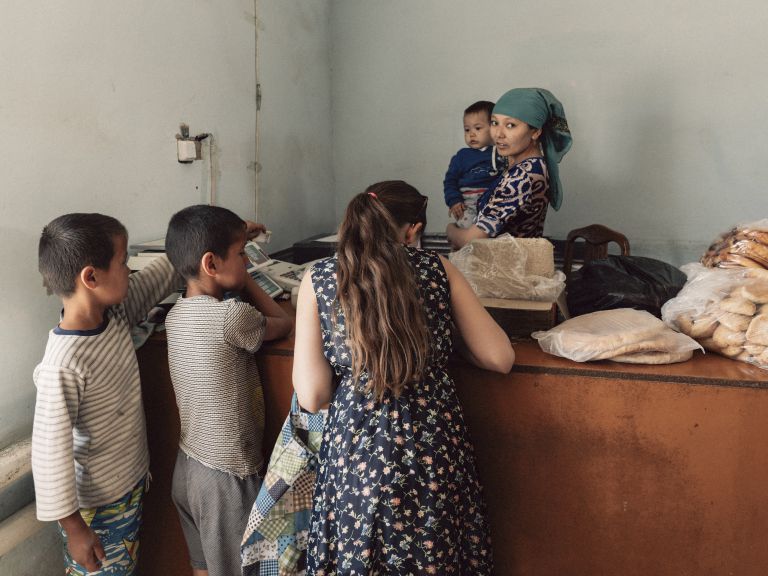 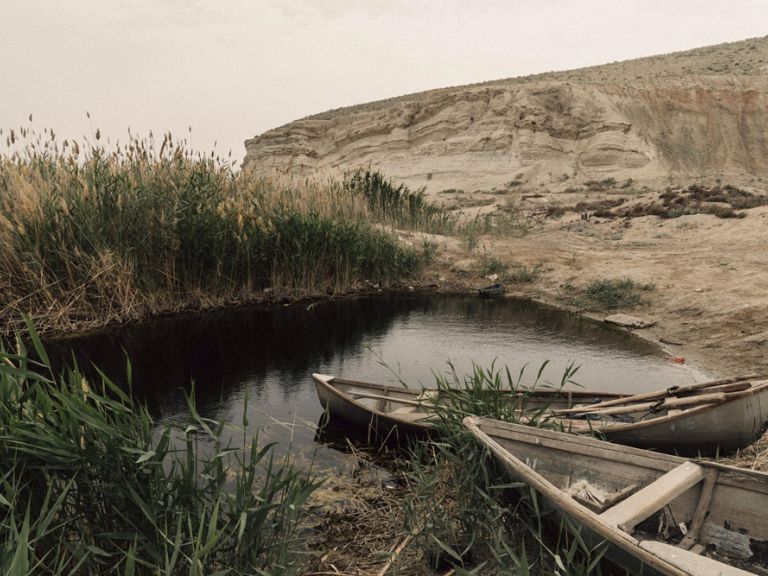 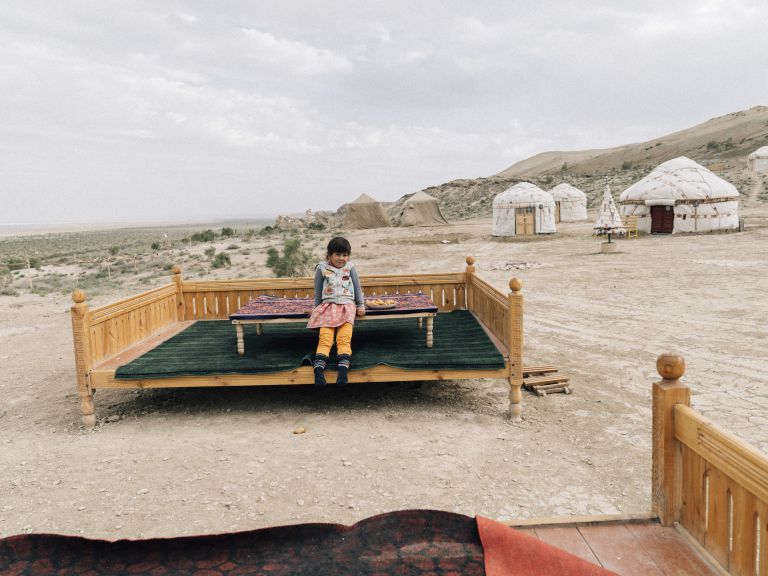 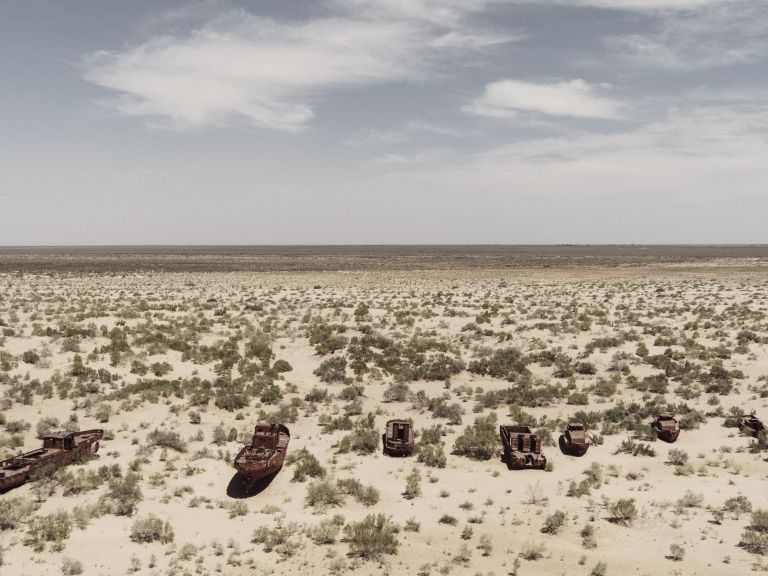 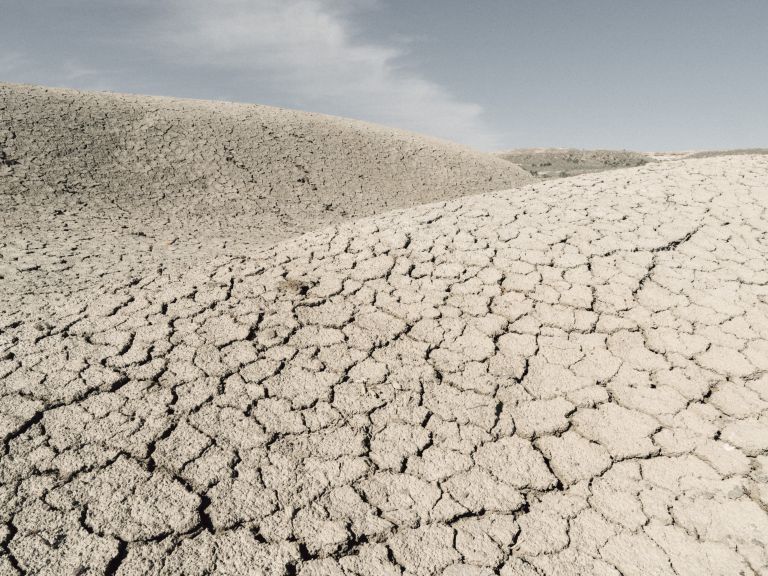 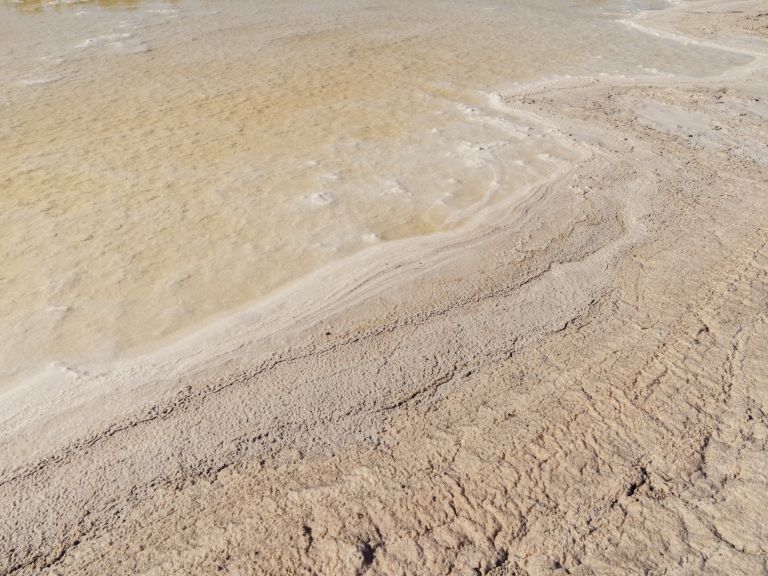