Nepal, May - June 2018. Causes and conseguences of air pollution in Kathmadu

I chose Nepal for three simple reasons, one interdependent from each others: the strident relationship between religions that venerate nature and its true condition, (2) there is an emergency of public health due to air pollution and, reason fundamental, (3) this emergency is destined to worsen due to the high population growth post 2015 earthquake.
The small Himalayan state, compressed between the two superpowers, China and India, is the place where religious syncretism is widespread. Hinduism, Buddhism, animism and shamanism often merge and confuse. The unique matrix of these religions is their relationship with nature, venerated and respected. But this aspect strongly clashes with the reality that is found as soon as we reach the Tribhuvan airport, Kathmandu. The air is objectively unbreathable. Moreover, it is sufficient to observe the daily life of the Nepalese, whether they are from a city or a village, to realize their unawareness of the damage they cause to the environment. In addition to the indiscriminate management of waste by the population and the inability of local authorities to treat urban waste, air pollution is the major problem in Nepal. The WHO has declared that it is the biggest cause of death in Nepal and that the situation is in a state of emergency for public health. The condition that makes Kathmandu unique from the other hyper-polluted cities of India and Bangladesh is determined by the strong and constant increase in population density since 2015, the year of the earthquake that devastated Nepal. In fact, the unstoppable and uncontrolled urbanization, the traffic increase, together with the absence of vehicle controls, the rapid growth of slums and suburbs in which coal is used for cooking and where the waste is burned, are the basis for an epidemic of respiratory diseases, first of all tuberculosis, a further public health problem. The ease of transmission of the latter (it is sufficient to inhale the bacilli emitted by a sick individual to be infected) is amplified by the low immune response of those exposed to unhealthy air. In short, this series of factors constitute a vicious circle of difficult solution and that make Kathmandu a potential epidemiological bomb.

According to the WHO - World Health Organization - the United Nations agency that deals with the achievement of the best possible health condition of every inhabitant of the planet, it is estimated overall that 24% of diseases and 23% of all deaths - about 12, 6 million a year - are linked to environmental risks such as air, water and soil pollution, chemical exposures, climate change and radiation . Nepal is not an exception and environmental pollution in the little Himalayan state remains a major health problem, especially in urban areas where most of the population is in direct contact with infected water and exposed to air pollution. In particular, the latter causes over 21˙000 deaths each year, causing more victims of road accidents, which in the same period of time kill about 2˙000 people .
We are used to thinking of Kathmandu as a forced passage to the very pure peaks of the Himalayas (it is enough to evoke Everest or the Annapurna massif), it is difficult to imagine it as one of the most polluted cities in the world. Unfortunately in the Nepalese capital the exacerbated and unchecked air pollution, caused by under-regulated urbanization and traffic, as well as the haphazard use of chemicals (especially by construction workers) fuel the exposure to dust and smog by the population. Not only that, the deposition of waste in landfills and/or the combustion of the same, the use of furnaces for the production of bricks, the use of biomass and kerosene for heating and cooking (often burned without flue or ventilation) increase the causes of outdoor and indoor air pollution in Nepal.
Located at 1400m altitude, the Kathmandu valley is literally surrounded by sub-Himalayan mountains. This geographical position does not allow the constant and complete air exchange in the metropolis. On the contrary, it favors the creation of a “gray cloud” suspended over the city. Although easily visible, it hardly disperses, occluding the capital.
Exposure to unhealthy air (both indoor and outdoor) is responsible for the dramatic increase in the number of people suffering from disorders of the cardiovascular system, such as allergic rhinitis, bronchial asthma, cough, dyspnea and wheezing, lung cancer, COPD - chronic obstructive pulmonary disease - and stroke. As always, the most affected by these diseases are the elderly and children.
In addition to the problems mentioned above, air pollution is related to pneumococcal disease, caused by bacteria that can lead to pneumonia and meningitis, because the average immune response of the population is very low. In fact, the ability of the immune response is a sensitive indicator that allows to demonstrate how is harmful the atmospheric pollution, as claimed by dr. Santa Kumar Das, Respiratory Ward doctor at the Tribhuvan University Teaching Hospital, according to studies by researcher Geneé S. Smith conducted at the University of North Carolina .
There is a significant association between PM2.5, CO and TB, i.e. the causes and effects of air pollution are closely related even when it comes to tuberculosis (TB). In fact, a growing number of studies have highlighted the potential role of atmospheric pollutants on the incidence of tuberculosis, already a public health problem in Nepal, according to DOHS, the nepali Department of Health Services. Not only does outdoor air pollution decrease the efficiency of the immune system, but also the immune function of people using charcoal, wood and kerosene for cooking is inhibited .
A study by Lalita Ramakrishan, a professor at the University of Cambridge's department of medicine in the United Kingdom, proves that macrophages on the surface of the lungs are the first line of defense when a bacterium enters the lung. The macrophage is a type of white blood cell that envelops bacteria neutralizing them and often succeeding in stopping tuberculosis infection in the lungs. However, when the smoke fills the lungs, the macrophages are obstructed, reducing their ability to inhibit the bacteria. Clogged macrophages are not able to effectively kill Koch's bacilli (bacteria responsible for TB infection), allowing them to multiply and allowing the infection to turn into a full-blown disease .
“The Kathmandu valley is not a good place for people who are allergic to dust, in fact the number of patients with respiratory problems has increased by 20%” according to what was stated by dr. Dirgha Singh Bom. The areas where road expansion is taking place are the most affected by dust pollution. “No place in the Kathmandu Valley is free from pollution, but those who live in houses by the roadside should be more cautious about their health” said dr. Kabir Nath Yogi, Head of the Respiratory Ward Unit at the Tribhuvan University Teaching Hospital “Dust particles suspended in the air from construction and vehicle emissions are the main causes of the increasing cases of respiratory problems and other health problems related to air pollution in Kathmandu”, adds dr. Kabir Nath Yogi. Using appropriate masks, educating people about the increasing risks of exposure to harmful air pollutants and carrying out regular health checks are some of the precautionary measures to be taken, he continued to state.
“Ensuring the right of citizens to live in a healthy environment through effective monitoring of environmental pollution for the protection and promotion of health” is one of the challenges of the government of Nepal, as publicly reported in the lastest annual report of the DoHS - Department of Health Service -. But is this a realistic medium-term goal? The government and people know that it is only possible with drastic changes? 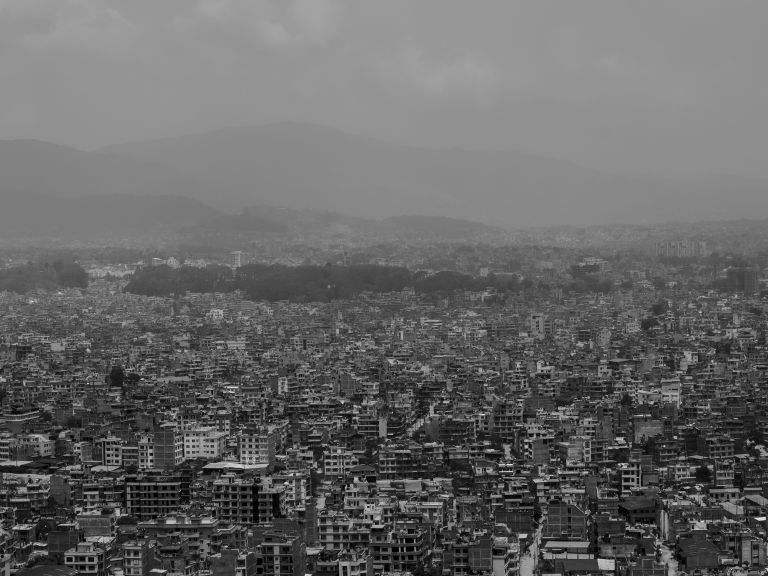 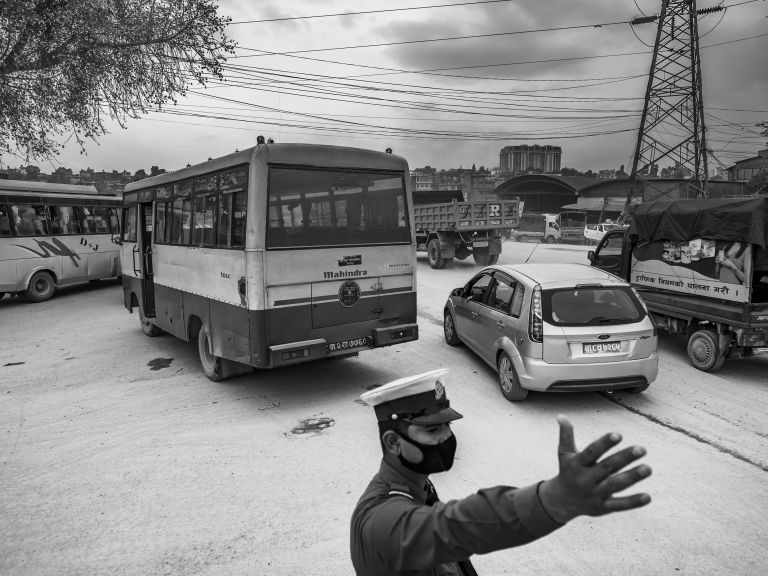 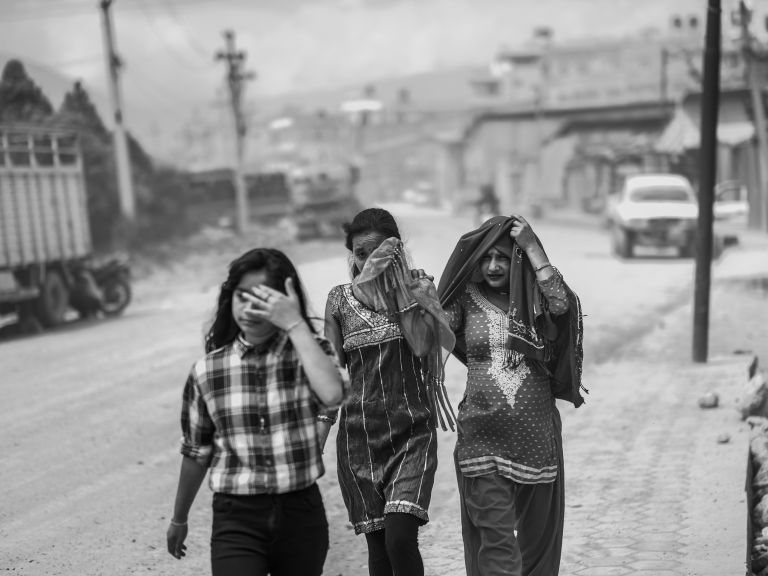 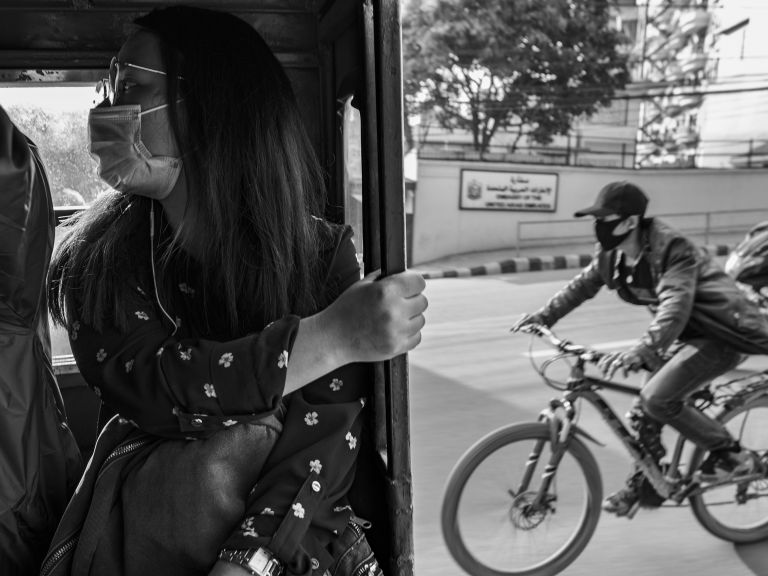 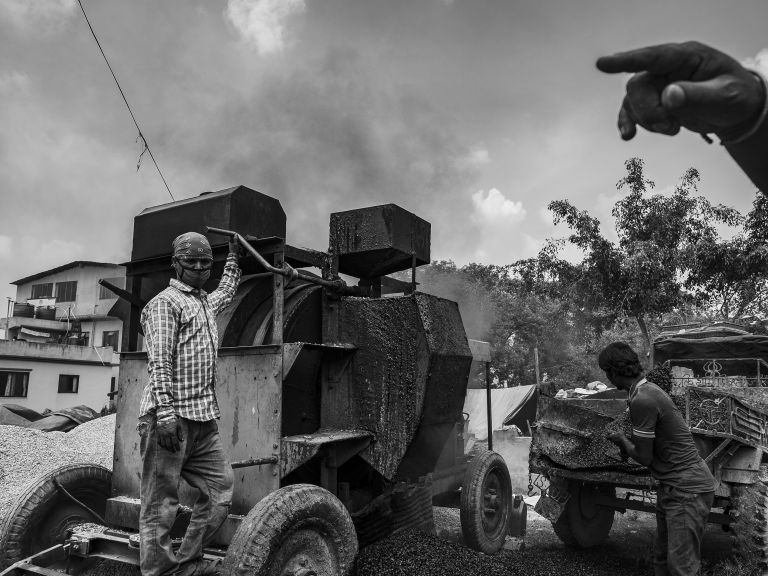 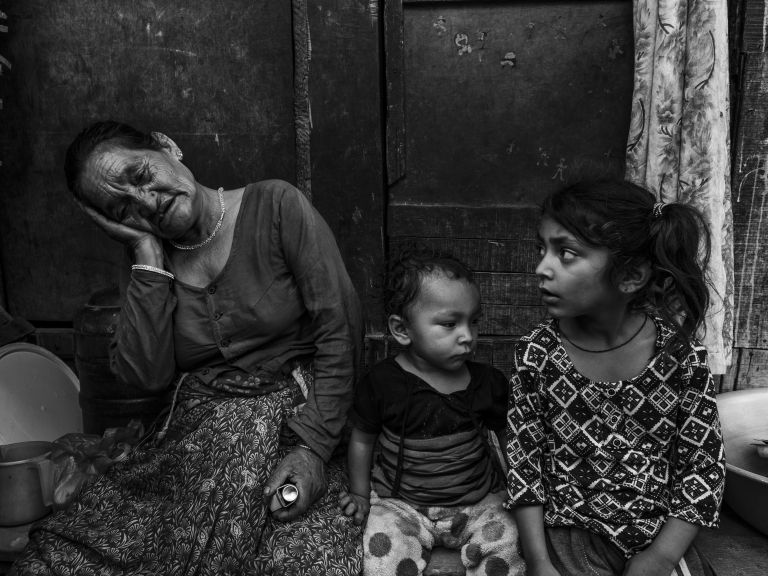 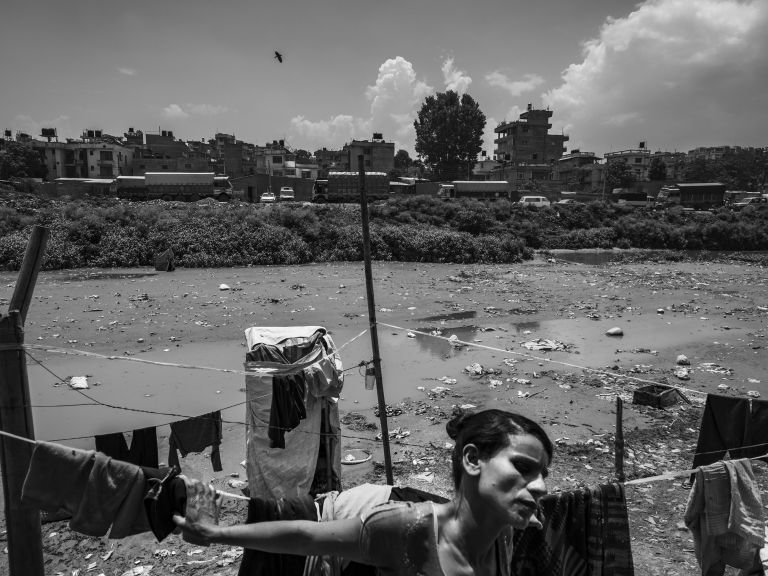 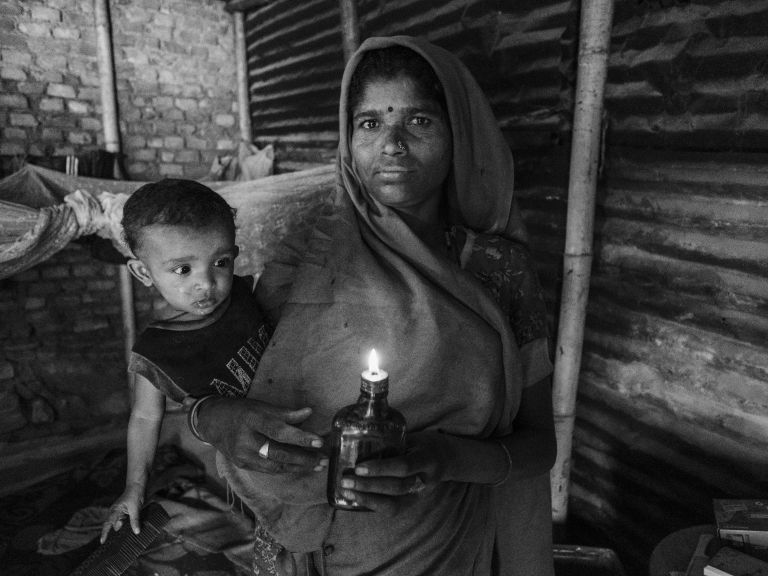 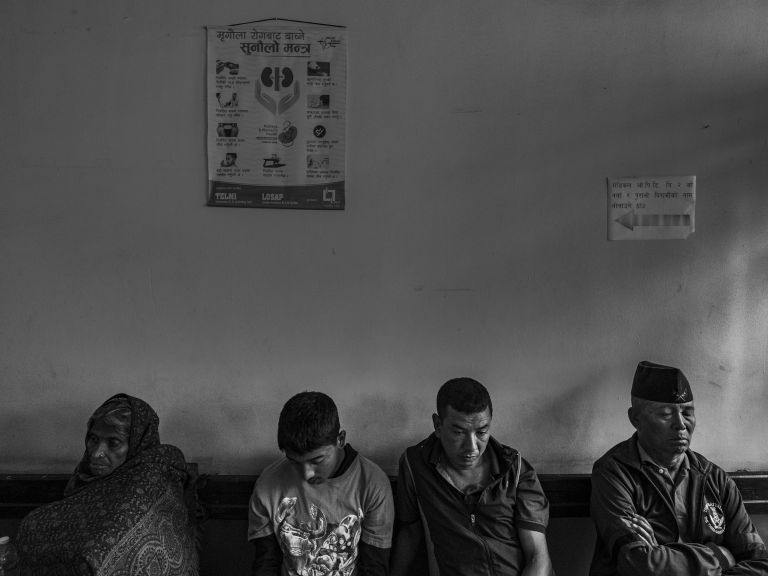 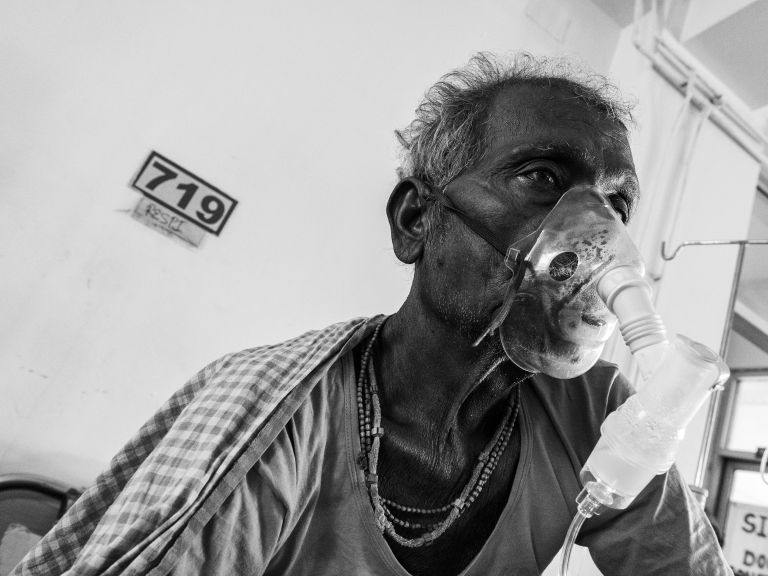 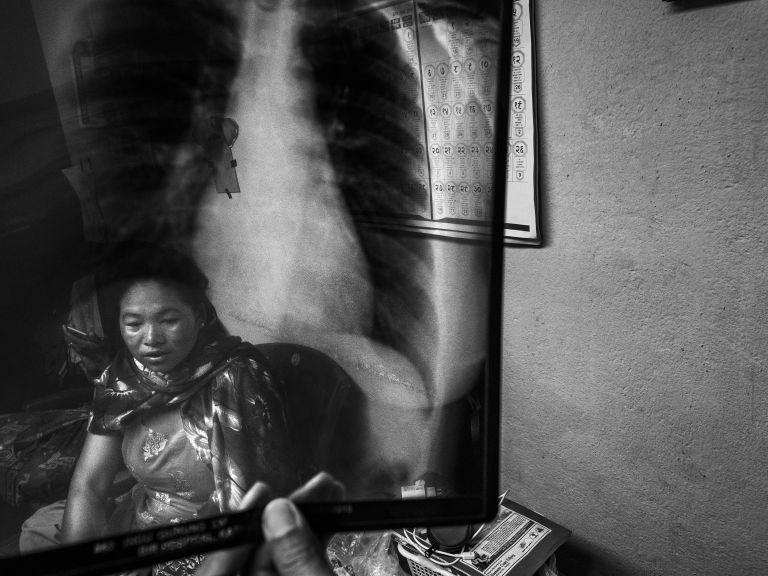 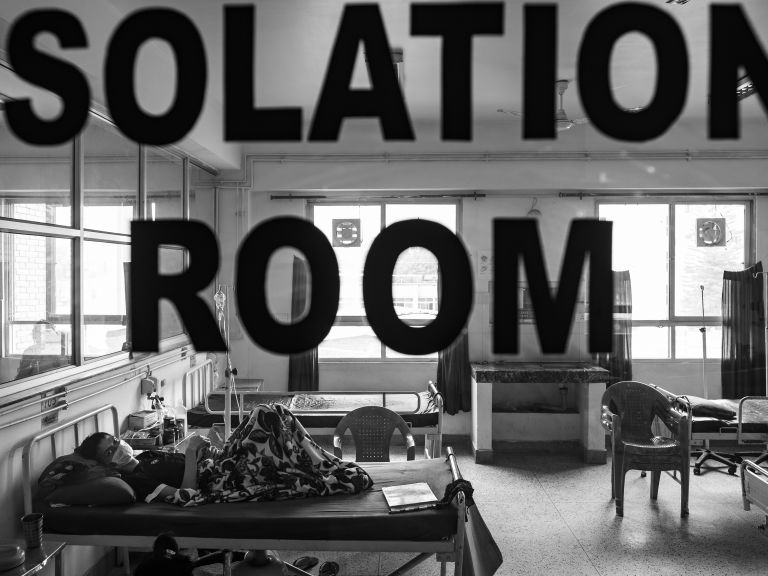