The circle that repeats In Accra the capital of Ghana, is the electronic graveyard Agbogbloshie, mountains of electronic waste arrivals from Europe and the U.S., all this obsolete technology to Ghana a country where the digital divide is enormous. Workers , adolescents and children , small and nimble hands , working in contaminated without any protection zone. These are part of the third of the population living below the poverty line. Among the high temperatures of the area, the tropics and the thousands of fires involving the area of black smoke recycle all the material to base your strokes , strength and burn all plastic materials to remove metals, aluminum, iron particularly copper and the most precious and most expensive . Small portions and clean copper are bought by local traders and when they have a larger amount that allows them to fill a container, again put in the international market and of course back in Europe and the U.S.

A recycled gaze LANDSCAPE VS STUDIO
A difficult place becomes a photographic studio. We are in an exterior: A photographic studio in Agbogbloshie. The photographer approaches chaos in a subtle way, a zone of lights and shadows. He introduces his small “trap” and tries to order that chaos. The new stage facilitates the elision of borders between models and photographer, between landscape and studio, a place that temporarily acquires a new use: gazing, posing. The most contaminated place of the African continent, a dumpsite of the West located far from its frontiers is, for others, a workplace.

IN FIELD AND OUT OF FIELD
The photographer tries to isolate the gaze of the model in his portable studio and manages to confront the place (a landscape) to the photographic factor (a studio). A devastating place that o ers an enormous distance between spectators and models. A recurrent game for the photographer, who connects several worlds and establishes a close relation between what happens in the different photographs, between that which is in and out of field. By offering a wider point of view, he includes what we were perhaps not supposed to see, offering multiple attention focus, making our reading all the more complicated.

BACKGROUND THAT LOSES ITS FORM
His background gradually loses its form and ends up betraying itself. His piece of cloth becomes a rag that blends with the nature of the place. A background that little by little becomes integrated and is absorbed by another background, the landscape.

TRANQUILITY OF THE GAZE
His photography extracts a pause, a peaceful moment that multiplies the point of view, confronting two realities: that of the place itself and that which is framed by the background the photographer introduces. An apocalyptic chaos finds an oasis on a clear piece of cloth, opening with it a brief space-time which is different day by day.

SPEED AND PAUSE
The gaze of the spectator o ers different speeds within the same image, the internal rhythms of the image are a consequence of the chromatic change that the photographer introduces. e transition from the dark tones of the place to the white background o ers the eyes of the spectator a place to rest.

̈RECYCLING ̈
A landscape filled with debris receives a new use. The act of recycling, which is so highly regarded in the West, shows its poorer side here. The photography holds a structure from which the first world runs away. The idea of giving a new use to something which others consider obsolete does not appear in these images. Everything suggests a sick place, which the photographer pauses for a few moments throwing a recycled gaze over it, although it may better resemble a dream, a theatrical drama or a moment of rest. This is an act of recycling that contaminates and that is difficult to digest.

THE LIMITS
The photographer, once more, plays with the physical limits of his own gaze, placing several frontiers within the same image: inside and outside, rush and pause, noise and silence, white and black. A confronted and comparative image; a photography that ends where the next one starts. His broken gaze seeks a certain unity and, often times, the difficulty for finding integration yields a kind of harmony between one shot and another. The photographer has managed to build, just for a few days, a small refuge amidst an apocalyptic world. 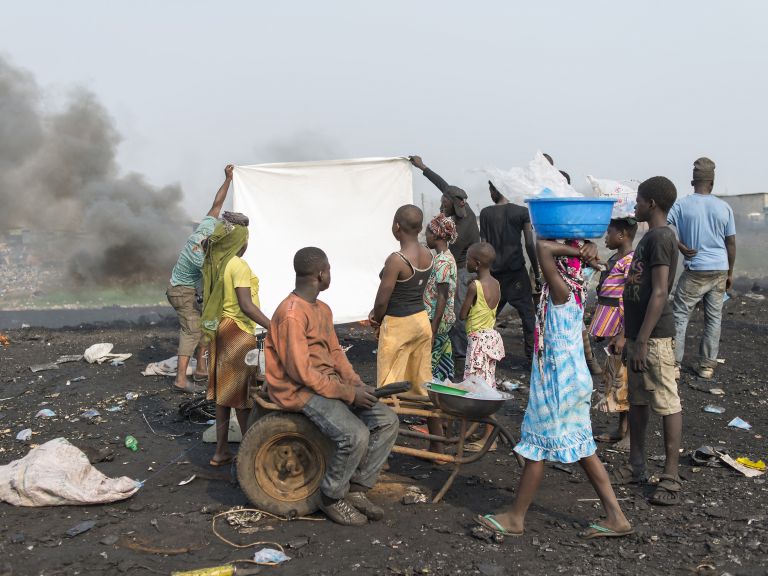 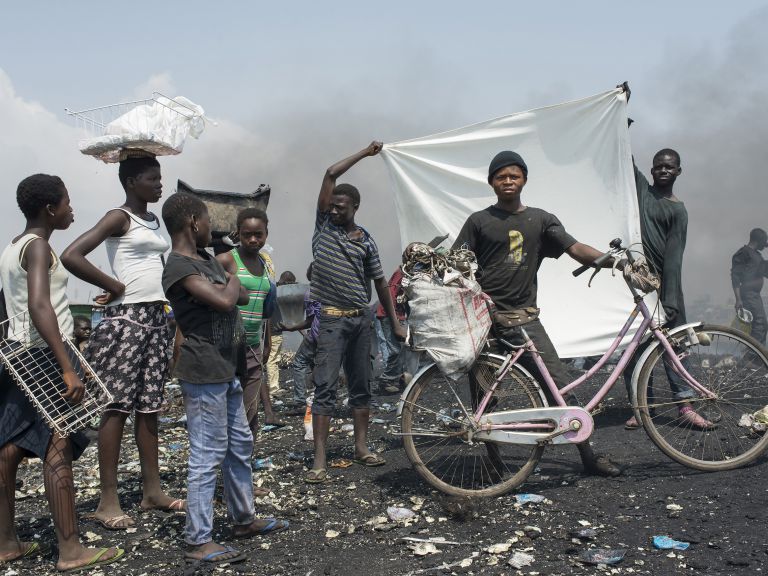 002 Mohamed and his bicycle for work 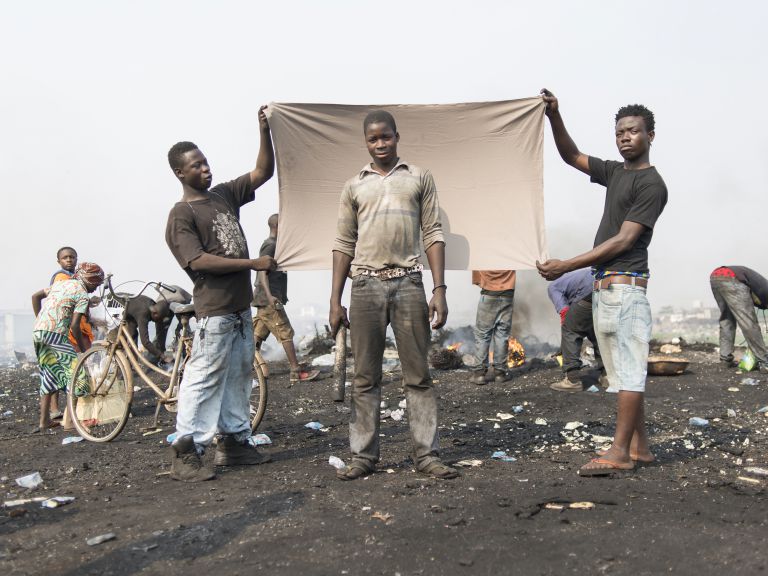 003 John posing with his work tool 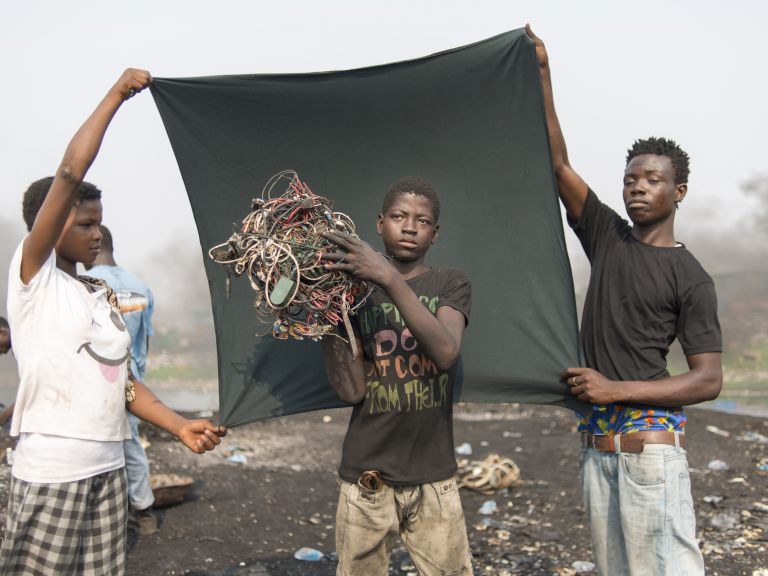 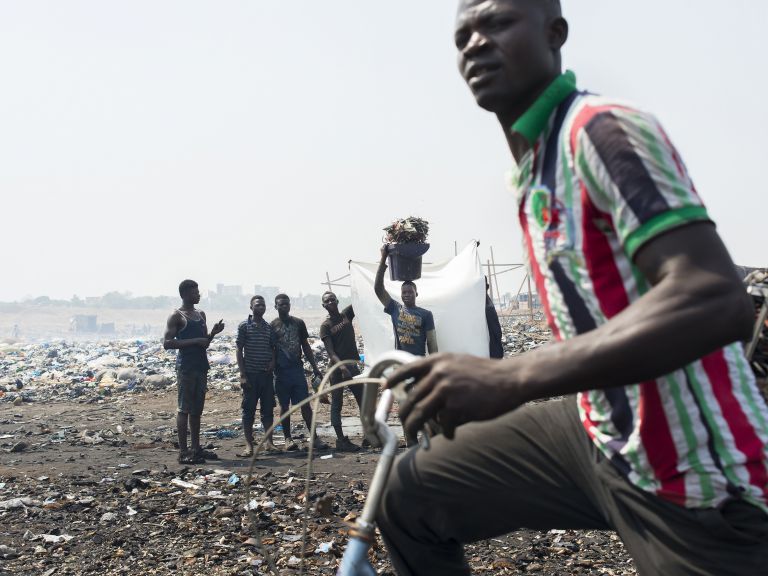 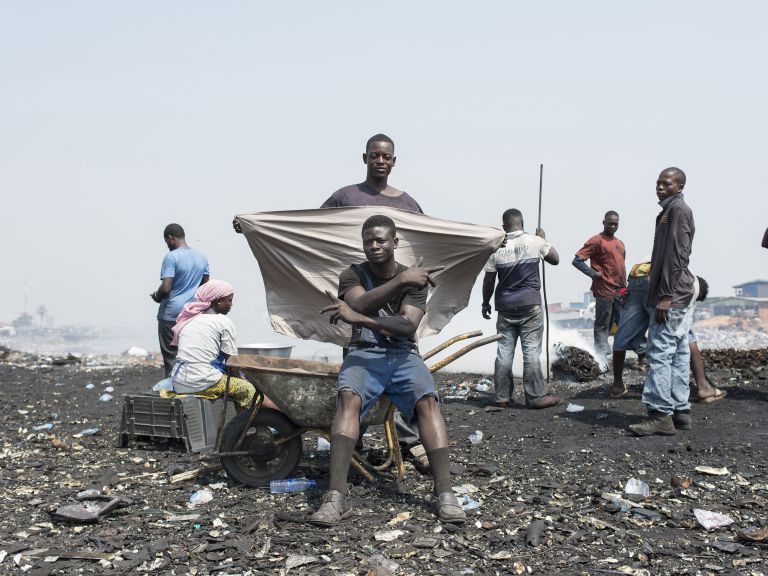 006 He is 21 years old, does not want to say his name, only wants to be photographed 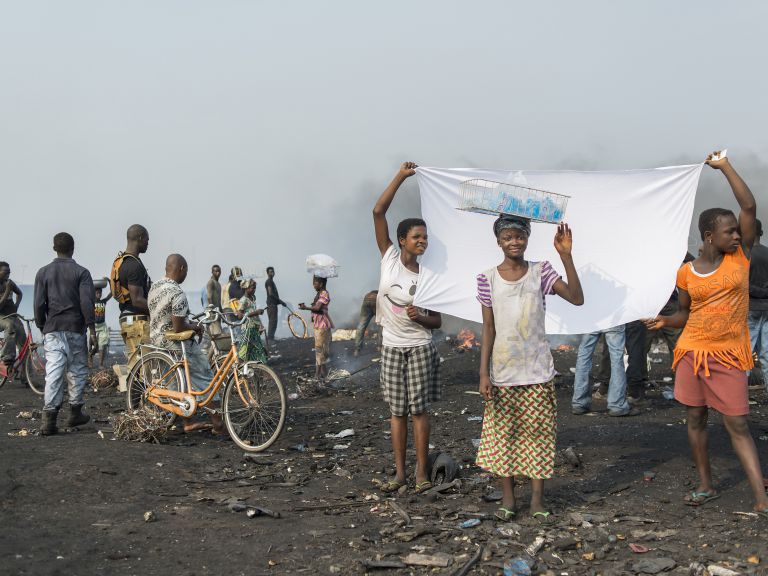 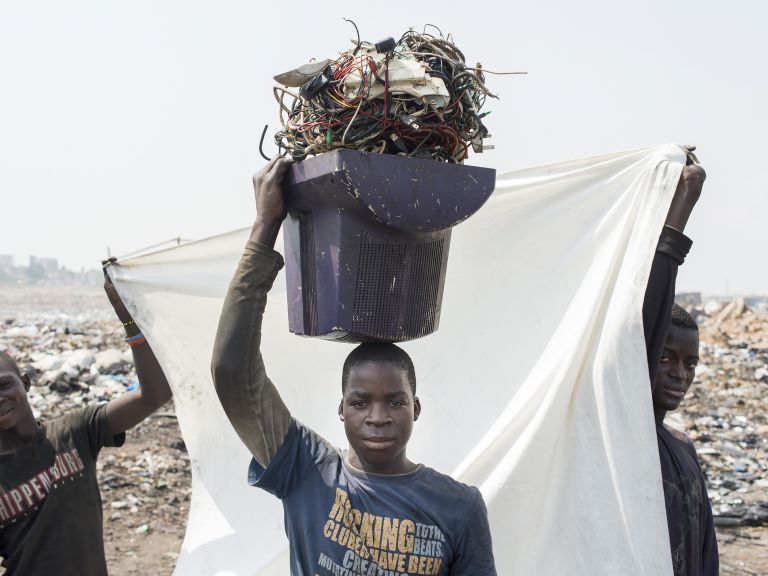 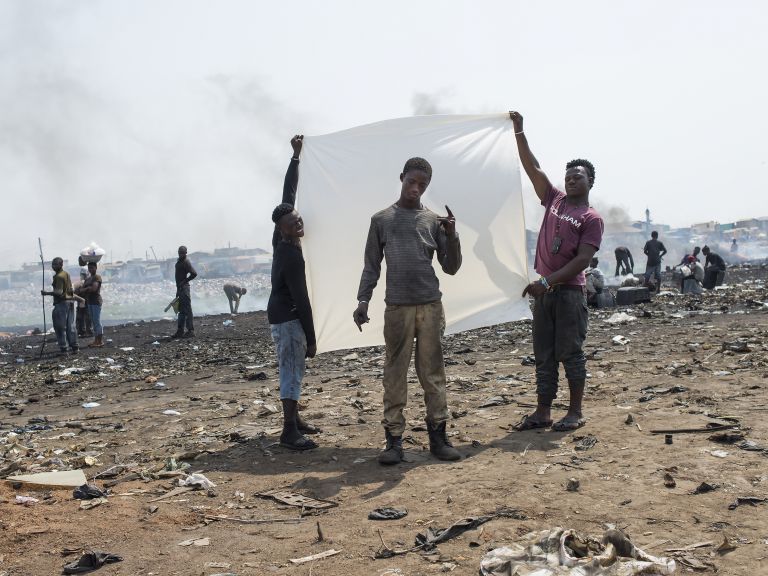 009 He tells me “Only God sees everything that happens” 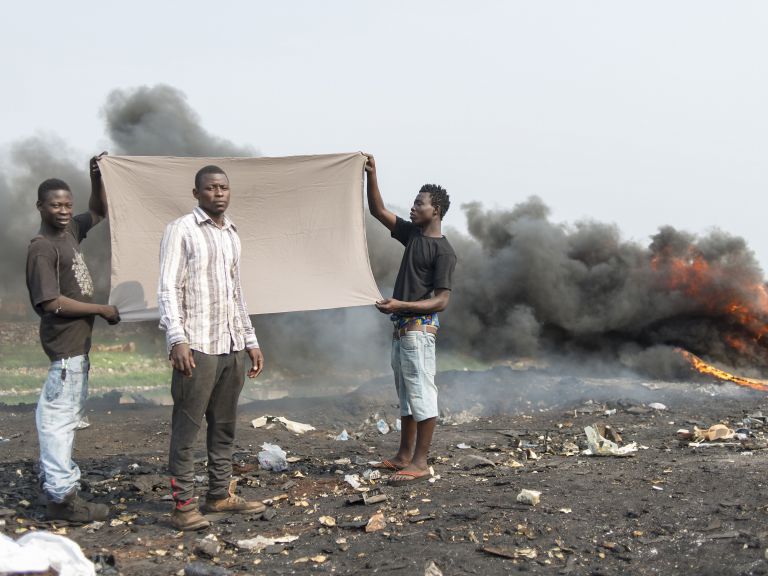 010 Johan, one of Agbogbloshie’s workers, poses for the camera 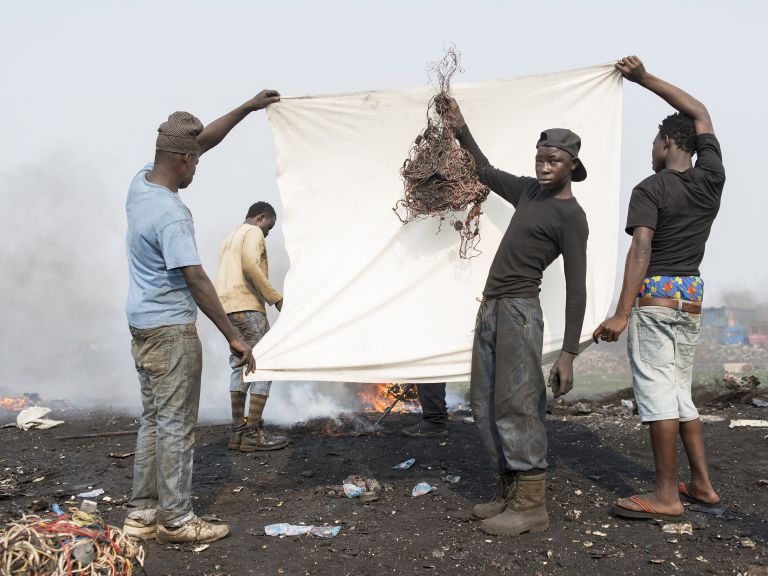 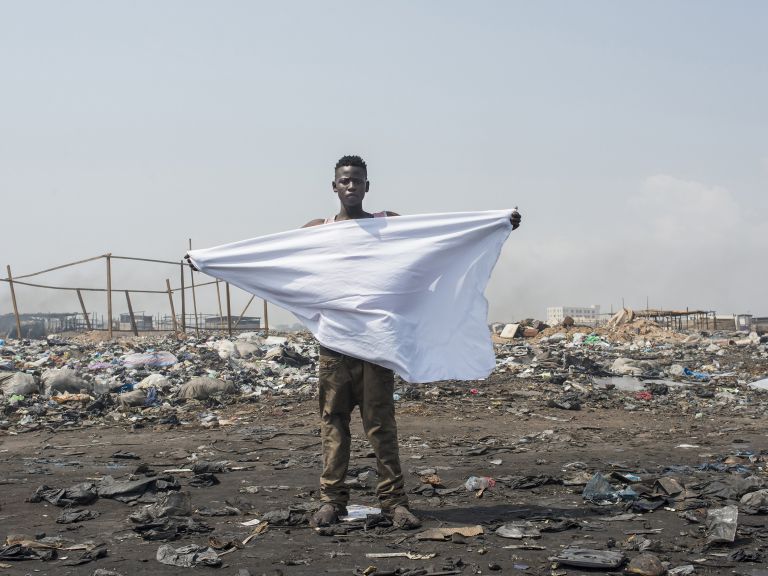