Project Detail: Lions of the Okavango

Lions of the Okavango

Too often I’ve spent the last morning of a trip, packing and “hanging out” so that we’re not late leaving. Really it means that I mope about and feel sorry for myself. Embracing the "don't leave before you leave" mantra has changed it all. We pack adventure into every minute until we absolutely have to go. Our last morning in the Okavango Delta, we decided to take one last game drive.

All week we had been following a lioness and her two nearly grown male cubs. We had followed their track deep into the bush the morning of our arrival and found them bedded down in the tall grasses. Each morning, we would find them again as they rested after a night hunting. Our last morning was no different. We saw them laying in the sun and then later walking down to the water to drink.

As we drove to the airstrip at the end of the morning, there was a fully grown adult male standing over a kill. He turned and roared and then loped off through the rising waters. The vultures swooped onto the kill and we followed the lion as he stomped through the weather roaring. After a mile, we realised he was chasing our young male cubs, trying to run them out of the territory so he could mate with the lioness.

Mile after mile, he chased them. It was like watching refugees leaving their land. The young males would plod on, sometimes pausing to turn back and look before continuing their journey. Then something changed. They heard their mother's roar in the distance. They stopped and looked at each other. Then as one they turned and confronted the large male. With the lioness behind him and the two young males facing him down, the adult male weighed the odds and took off running with the two males working to drive him away from their territory and their mother. 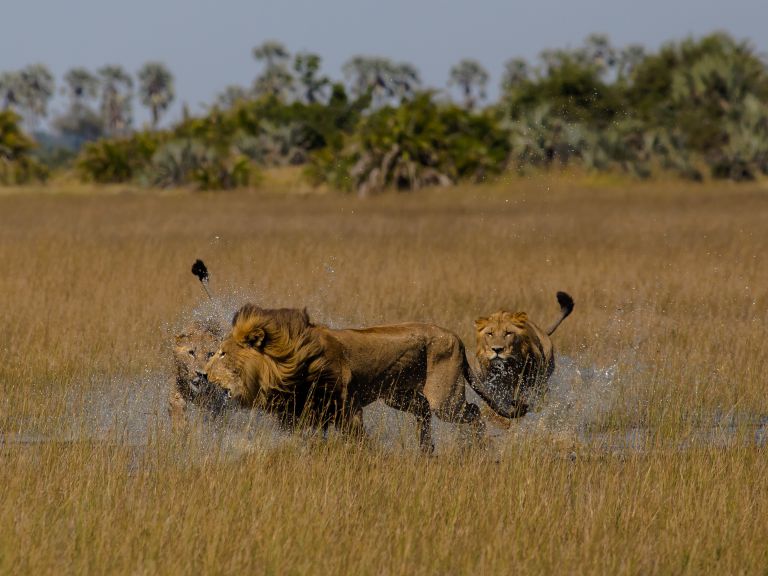