They are unlawful people born in Myanmar as members of the Rohingya, the Muslim minority of the country. One million Rohingya lived there until the expulsion began. Myanmar has never recognized them as citizens, they were stateless. For years, Buddhist monks have been campaigning against Muslims, many citizens have prejudices against them. In August, radical Rohingya attacked several police stations and killed twelve security forces, since then the hatred has exploded. Soldiers and civilians mobs storm the Rohingya settlements in Rakhine province near the border with Bangladesh and fire house by house, village by village. They want to erase everything. More than 6,50,000 Rohingya have fled across the border, to Bangladesh, where no one expected them, and where little help can be found. It is still monsoon season, it rains every day, the country is flooded. The refugees stranded in the border area, in the void, they settle along the only road in the region, from the border to the small town of Cox's Bazar, they build tents made of tarpaulins and bamboo canes. An improvised refugee camp that grows every day.

Rohingya refugees arrive on the Bangladesh side of the Naf River.

TEKNAF, BANGLADESH- SEPTEMBER 13: Rohingya refugees try get on a boat from Shahporir Island to Teknaf mainland after landing on the Bangladesh shore of Naf river.

Small char (temporary Island) between Myanmar and Bangladesh river where refugees took shelter for the night after crossing from Myanmar. A young refugee girl looking at the dead cow which floated from Myanmar to the shore of Char and still smokes are visible on the horizon from village burning.

Two Rohingya women fight for a rack that was thrown from a truck with auxiliary shipments. There is a great lack of food and supplies in refugee camps.

Abdur Rahim and his wife Nasmin, and Abdur holds his boy in his arms. The boy was twelve days old. He did not have a name yet.

They can not talk, they just cry, they stare. Cry until the eyes are red. Do not say a word. Towards evening they stand in the mud of Bangladesh, In front of them, in the street, there is a crowd of people, thousands are looking for a sip of water or a sack of rice. Abdur Rahim and Nasmin have a dead child with them, but hardly anyone is aware of them.

There are also Abdur Rahim and Nasmin and wait, not knowing what.

on 4 Sep, when in the morning the mob reached their village, dozen soldiers, they screamed: Get out of our country, you do not belong here!

The soldiers shot indiscriminately as Abdur Rahim and Nasmin sneaked out of their farmhouse, having just been married for a year. He was a farmer and she was the pregnant housewife. Crouched, they ran into the woods, watching the smoke rising behind them. The men poured gasoline on the houses, then threw burning wood into it. The village did not exist anymore.

They ran for a day and a night until they reached the border river to Bangladesh, the Naf. Thousands of others were already waiting there. Army helicopters circled above them, but here, by the river, the soldiers left them alone. When one of the fishing boats from Bangladesh arrived, Abdur Rahim paid the fisherman the equivalent of $70 for himself and Nasmin, his money was just enough. With maybe 20 others, they got on the boat. The drive over the Naf took half an hour, then they jumped into the shallow water and ran to the beach.

They started walking from the beach, Abdur Rahim and Nasmin, they could no longer afford any transportation. They ran after the others, they ran for few hours, Nasmin had her labour pain. It was too early, she was only in the 7th month, but her boy made it, he was born. She gave birth of the boy in a vegetable shop selling table.

A small, weak baby, born into a hostile world. And left the world.

A rohingya boy in a camp.

An elderly couple in their makeshift shelter in Balukhali camp.

A Rohingya mother, her 5 years old only son was shot to death by Burmese military. They shot in his ear while Myanmar military was putting land mine 25 days ago. She walked with her husband Abdur Rahman to the Bangladesh border with her wife and 6 daughters for 7 days then entered to Palangkhali border, Bangladesh.

ISMAILFERDOUS_Rohingya_011.jpg: Last night around 11pm, a new Rohingya family (arrived 6 days ago in Bangladesh ) with 9 members were sleeping in extended part of Kutupalang registered camp, were attacked by a group of wild elephants, 2 people died rest of the people are in the hospital. In 2 dead people the older person was 45 years old and a baby, who was 8 months old. In this picture the baby's grandfather grieving before burying the dead body.

A Rohingya father, Abdur Rahman, his 5 years old only son was shot to death by Burmese military. They shot in his ear while Myanmar military was putting land mine 25 days ago. 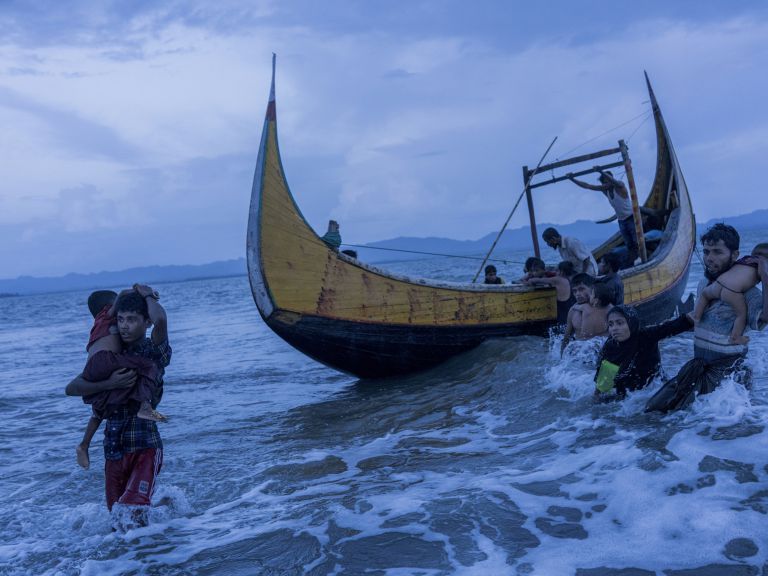 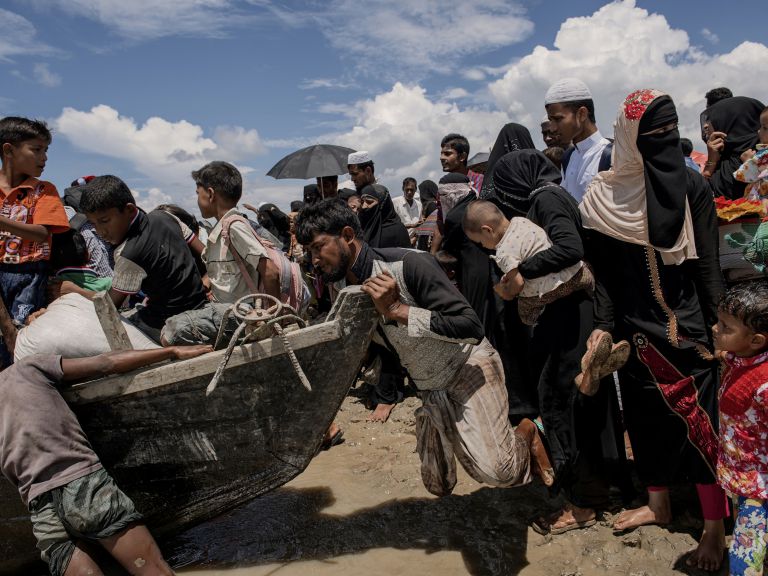 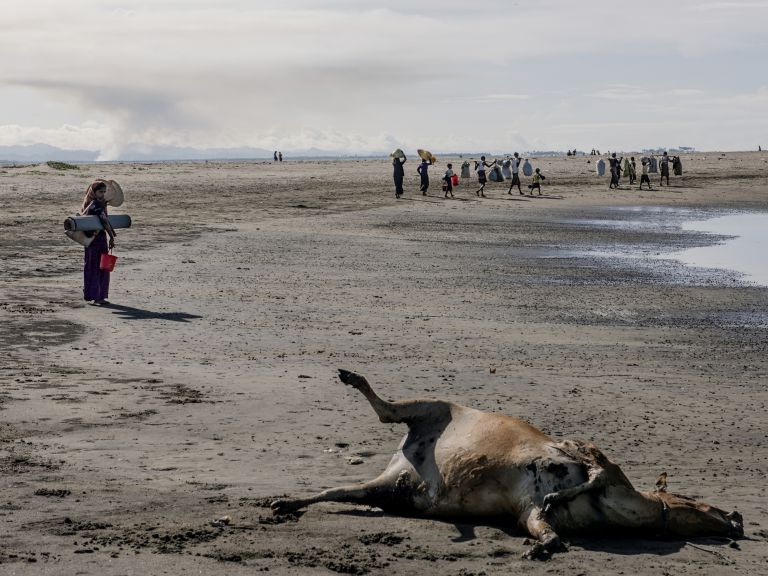 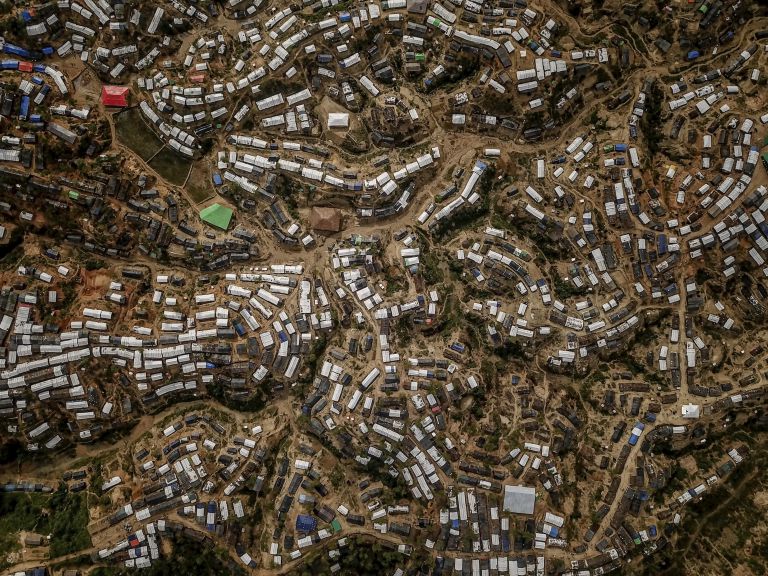 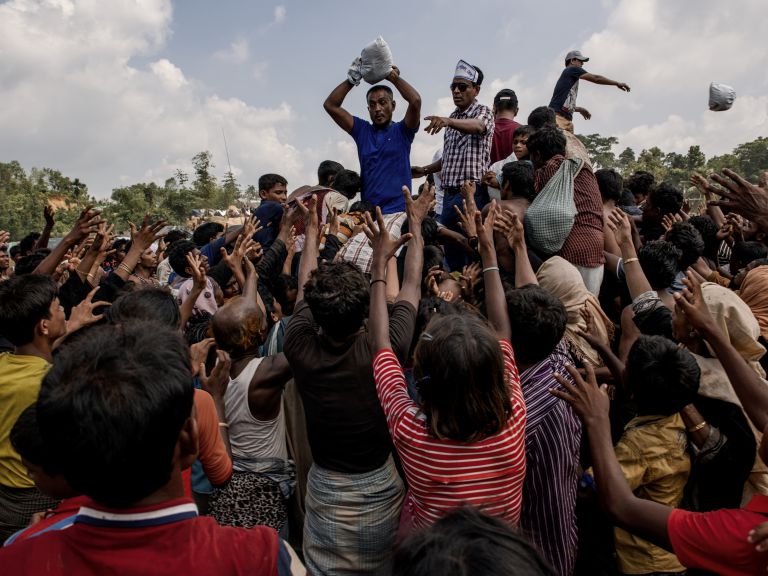 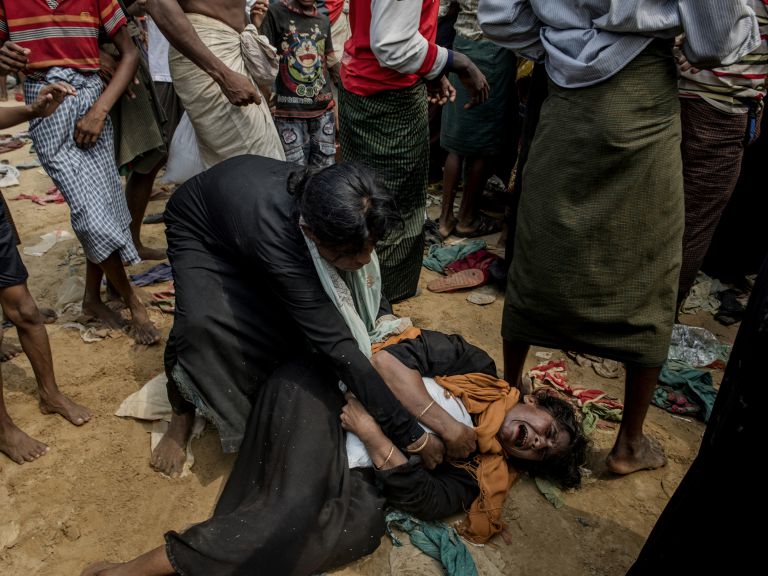 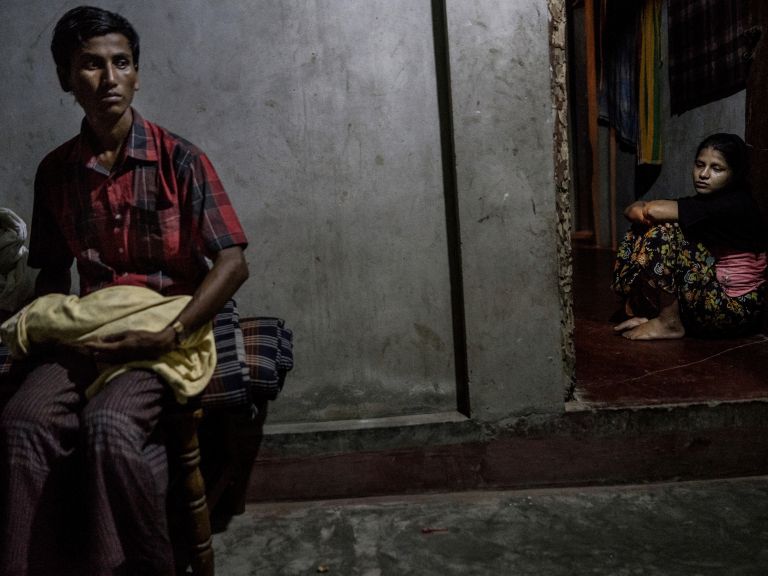 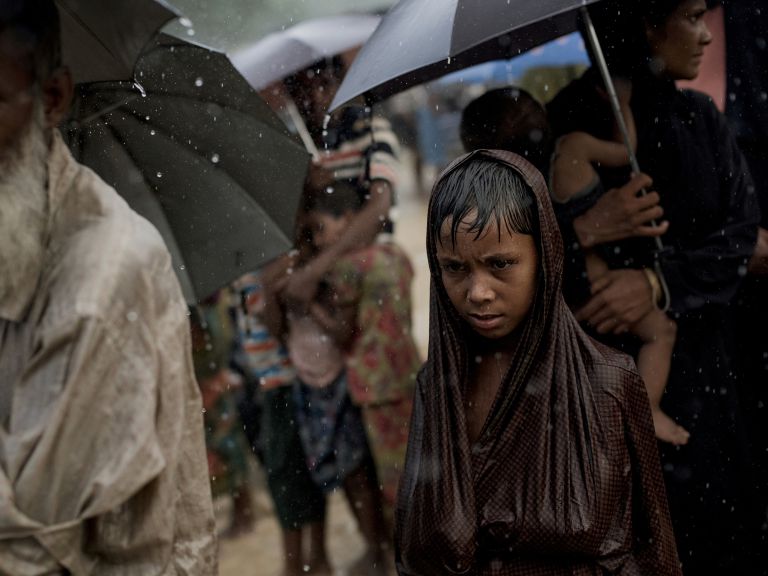 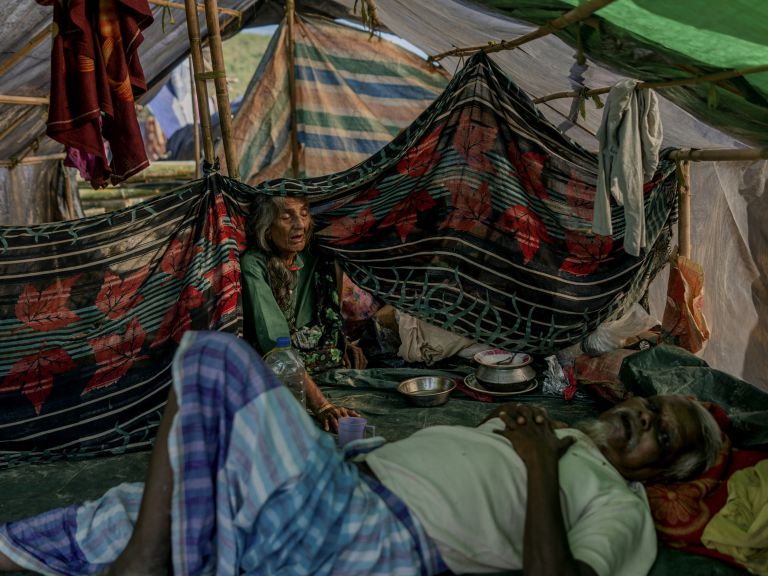 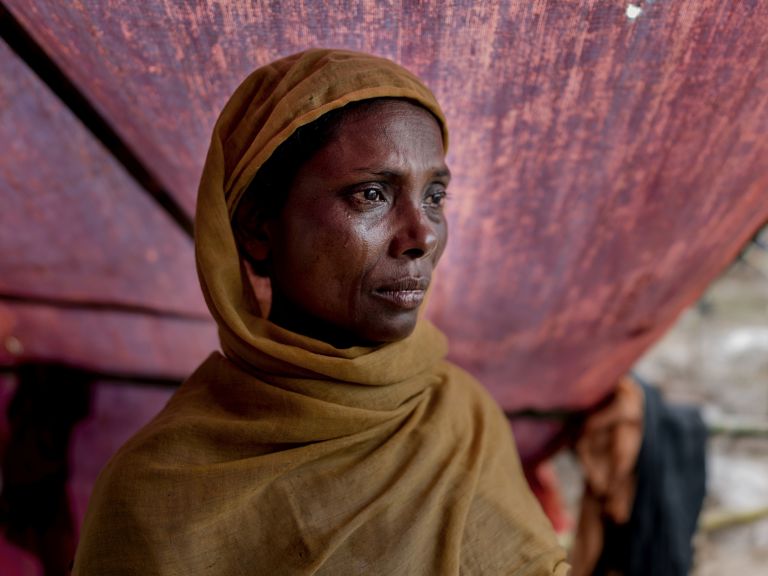 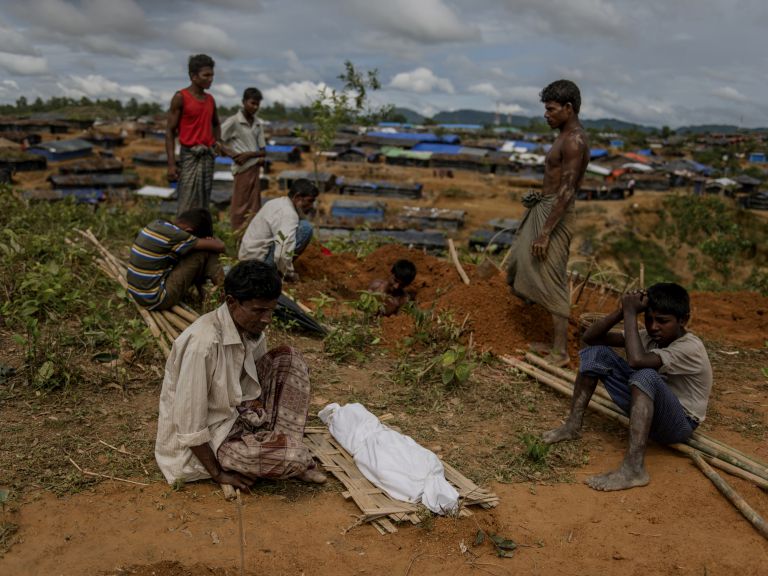 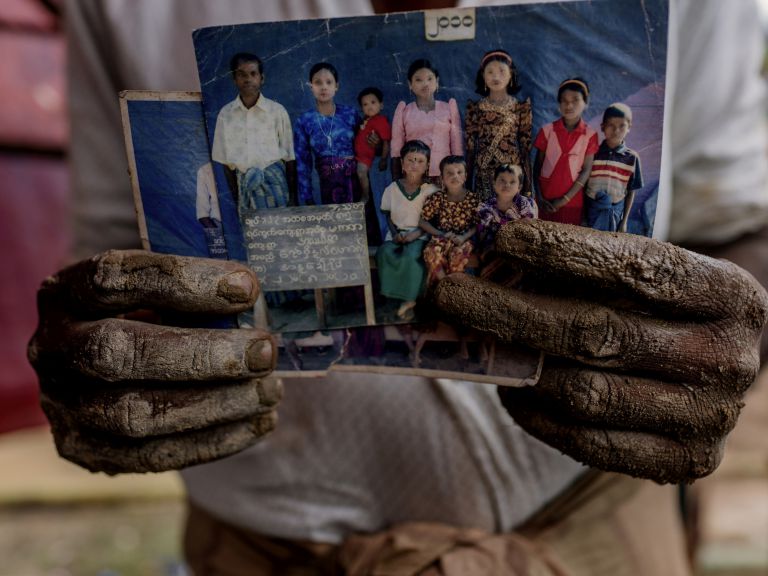