As European political culture shifs to the right and increasingly alarmist tones are spouted from Berlin to Budapest, a signifcant shif in refugee and migration policy can be observed.

EU borders are being outsourced to central African countries; proxy hotspot-camps are being run on Greek islands in the Aegean. All the while, disenfranchised migrants keep fruit and vegetable prices low for northern-European supermarkets by slaving away for €20 a day and wallow in flthy slums in Campobello di Mazara, Italy. Romanian, German, Bulgarian and Italian companies have made billions through the export of weapons to war-ravaged areas around the globe. Germany plays a crucial, yet under-reported, role in a number of conficts. With its airbase Rammstein serving as a departure point for most US drone strikes and chemical manufacturers such as BASF who have been proved to have supplied materials of war to ISIS, and currently, German tanks line the Turkish- Syrian border, threatening the lives of our friends in Rojava.

Tese conficts destroy lives and habitation, creating large diasporas and creating new migration patterns. European countries have used the humanitarian intervention rationale to exert control around the world and to further their own economic goals, through both so-called development aid and peace-keeping missions. In a bitter twist of irony, the massive humanitarian catastrophe happening at the EU borders is not worth intervention. Yet, the deadliest border is the Mediterranean Sea. An estimated 23,700 people have died attempting to cross the Med in the last 14 years. Apparently, this is meant to serve as a deterrent to future migrants.

Humanitarian intervention here is an IT-nerd from Cologne fxing the wiring onboard Sea Watch 3, 12 miles of the coast of Libya. Humanitarian aid is the lifeguard from Euskal Herria who tends to torture wounds onboard the Aquarius. But too few exercise civil disobedience, too few recognize the interconnectedness of the privileged western life and the plight of the subaltern.

Tese ambiguities don’t seem to faze many, least of all those creating policy within the behemoth that is the EU or the UNHCR bureaucratic machinery. Human Rights now merely serve the EU image- politics. Because cycles of capital, weapons, and vegetables must keep spinning! Te fows of weapons, the extraction of resources abroad, and extortive IMF contracts are connected to migratory crises, yet we continue to externalize and shrug of responsibility. A dirty deal is struck with the Turkish dictator Erdogan to keep refugees out. Tis is in open opposition to the EU Charter of Human Rights as well as the international Non-Refoulement law – Yet, deals must be brokered, compromises made.

Afer witnessing what goes on at the fringes of this broken union, I wonder if all that sufering piles up somewhere? Will those bodies return as ghosts in history to haunt us? Will they be eaten by fsh to then be sold steamed in seaweed butter with artichokes and baby carrots with a Solferino of vegetables in Nizza? Are we eating our victims or just swallowing them? What futures have sunken to the nadir of the Med?

Hope for safety still drives many to the moat that is the Mediterranean Sea, despite the EU’s policy of using death as a deterrent. But the fortress is slamming the gates, perhaps for good. Barbed promises are slicing up the continent again, new walls and fences have gone up in Austria, Bulgaria, Greece and Hungary, bringing to the fore the clumsiest of abstractions: the nation-state. But then again, perhaps we need more human-capital to tend to our senior citizens or pick our tomatoes in the searing mid-August heat. A trajectory is being set in Brussels, in Berlin. Mare nostrum abandoned, Iuventa impounded, ethics askew. It is being proposed that we put a limit on the number of refugees allowed in. Meaning that Human Rights, once again, are negotiable, are matériel for deals, interests and blufs. But the sufering is inefable, real, and jarringly so. And it is piling up in Lesbos, avalanching in Pozzalo, and scarring us in Sabratha. 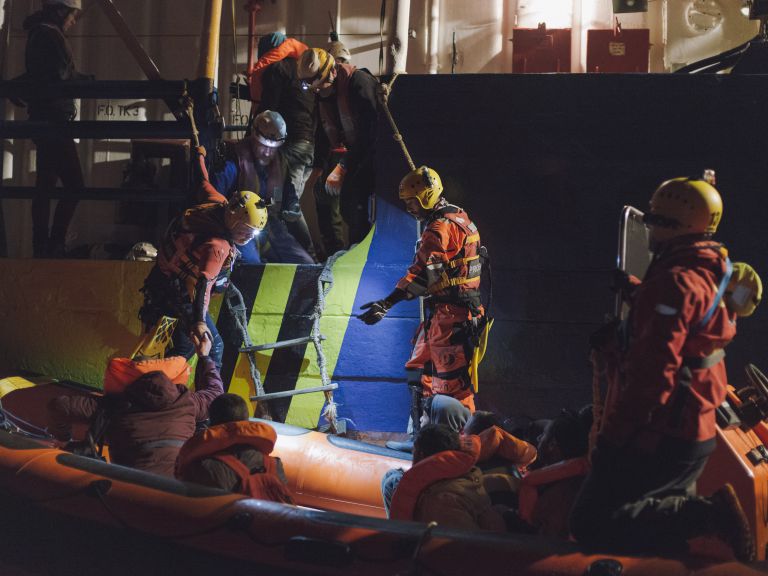 The Spanish Rescue organization PROEM-AID's speedboat during an operation on the Mediterranean sea. 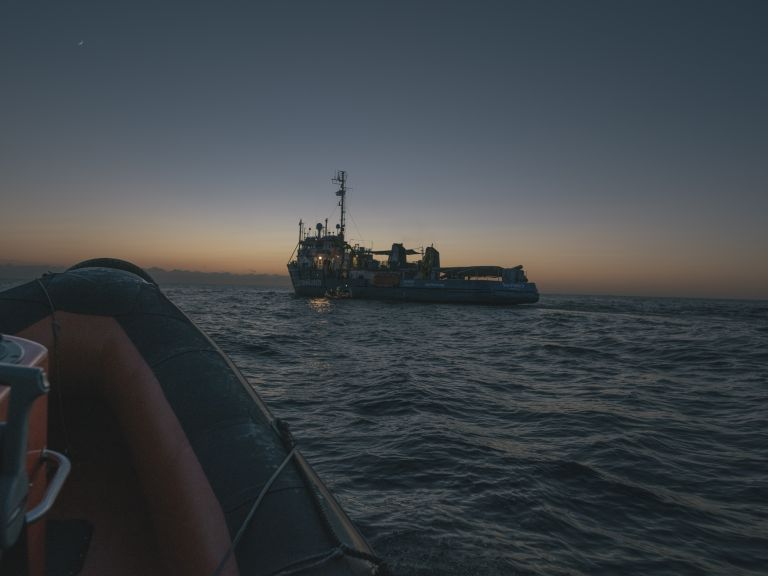 The Sea Watch 3 seen in the SAR area off of the coats of Lybia. Volunteers and employees venture her 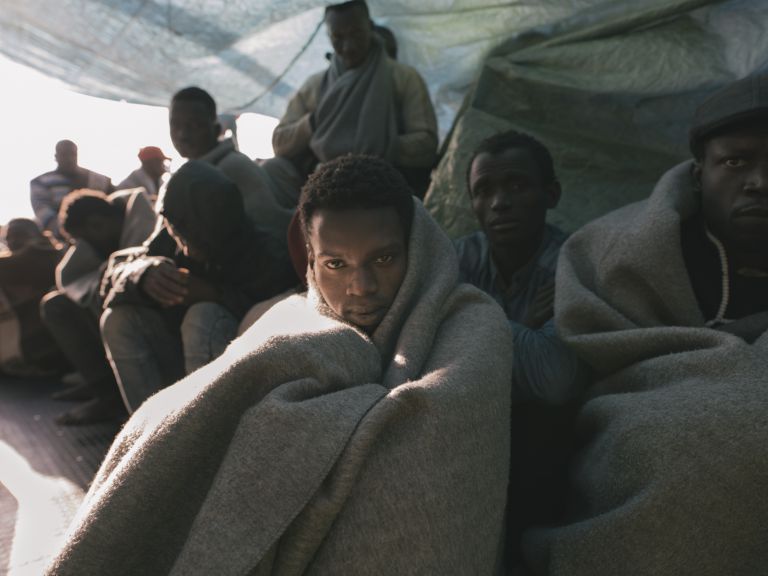 A portrait of a Refugee on board the Sea Watch 3. The ship is on course to Italy; everyone is suppli 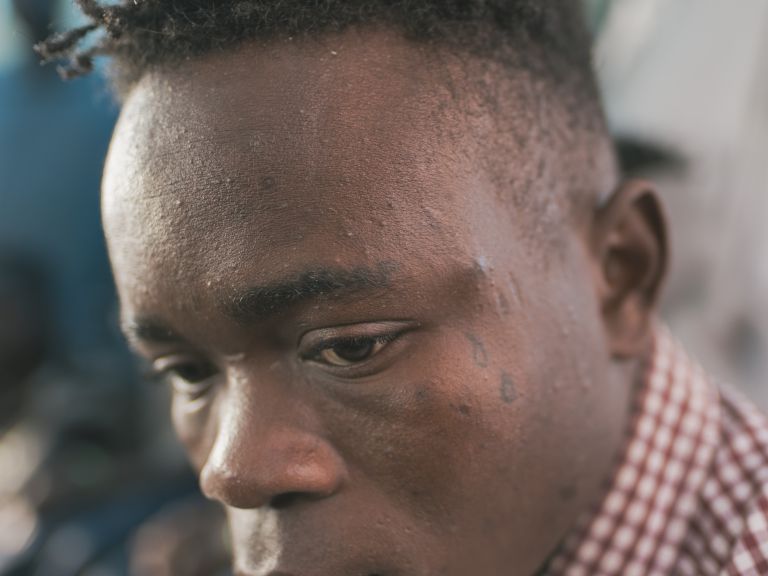 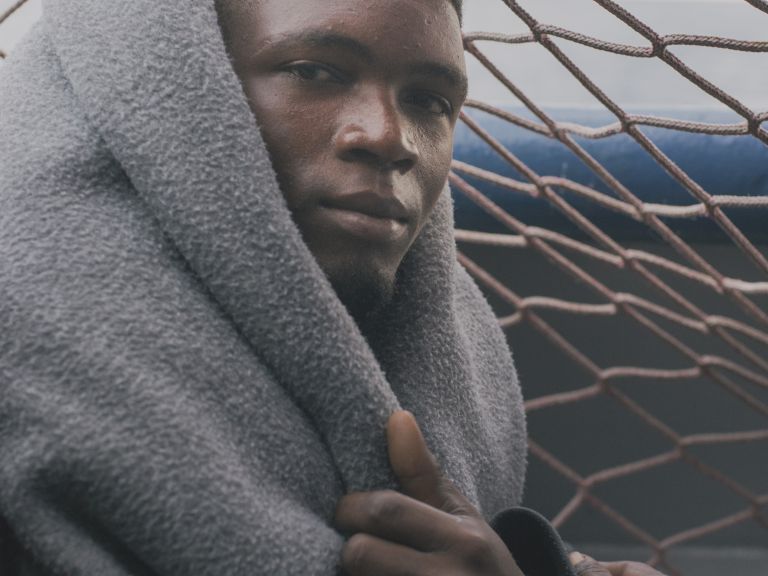 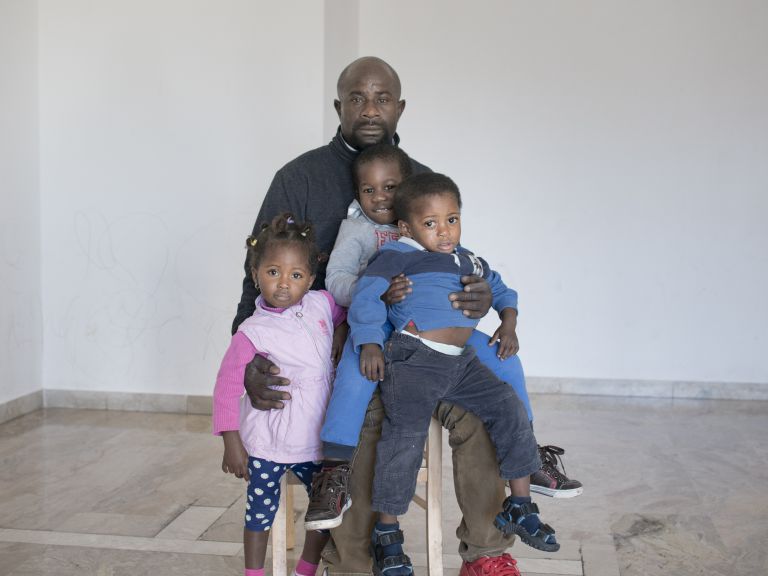 Nicolas and 3 children are sitting for a Portrait. They fled from Libya, where Nicolas spent over te 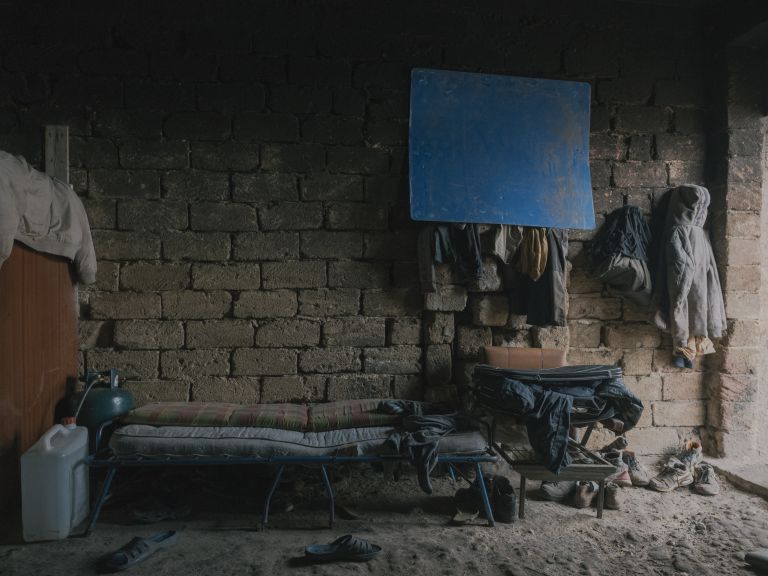 Housing for one of the few long-term residents of the slum in Campobello di Mazara. The Senegalese m 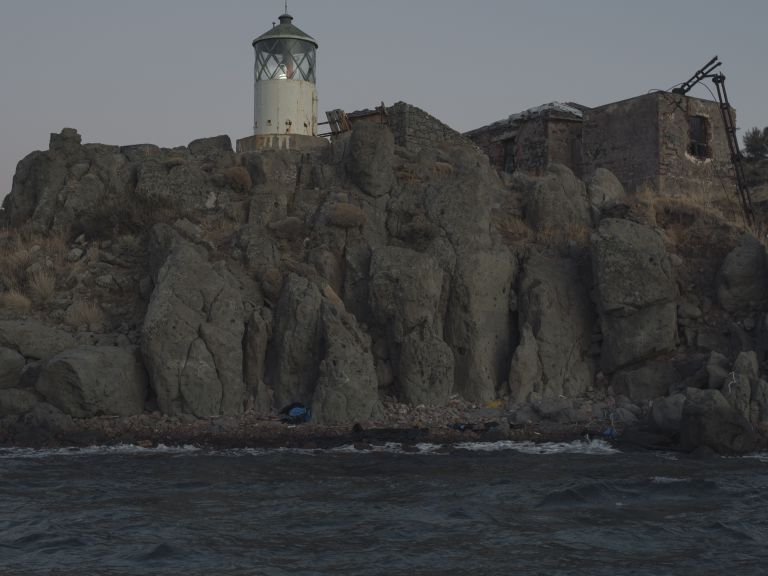 The lighthouse of Korakas in the north of Lesbos. Many refugee boats from Turkey land in this area, 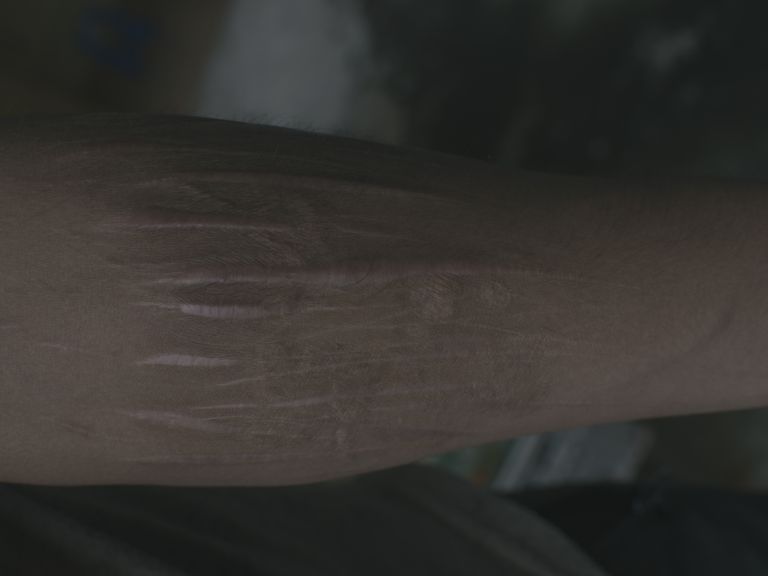 45. The forearm of a Pakistani Refugee shows signs of auto-aggressive behavior. His comment is: „I 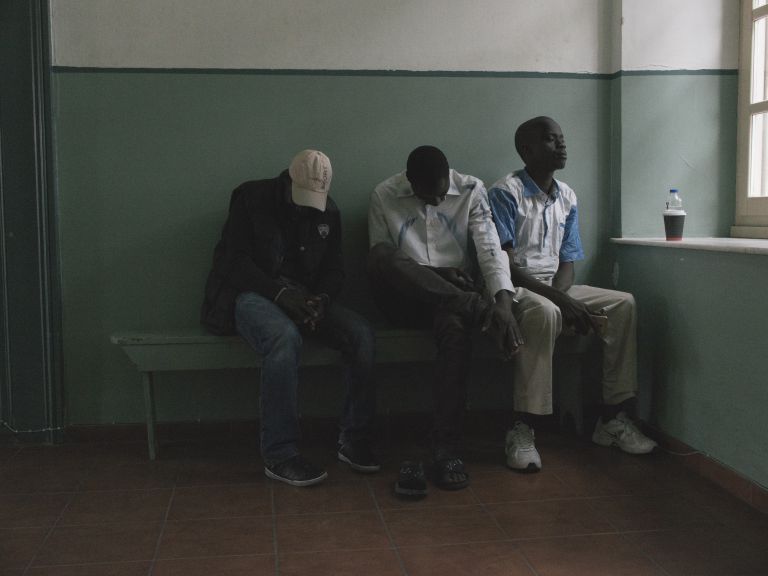 Three of the accused Moria 35 in front of the courtroom in Mytilini, Lesbos. The pre-trial is to est 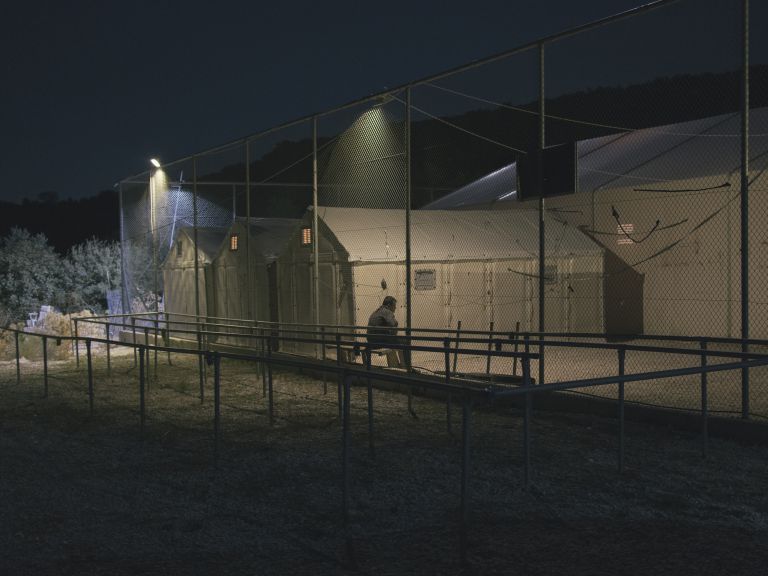 The 'Stage 2' camp of the UNHCR serves as a transitional camp for newly arrived Refugees on Lesbos.