The problem of land tenure in Colombia is the country’s oldest conflict. The struggle for control of the land’s wealth, and the right to exploit its resources, is an ongoing dispute in which the weakest struggles for its survival.

The mines of Muzo, the emerald capital of the world, have produced great fortune for the mining owners who disputed them for decades in the so-called “green wars”. A battle for the ownership of the subsoil that today is in the hands of the hitmen.

Since 1960, its surroundings have attracted tens of thousands of people from other parts of Colombia who settled in the region hoping to find the precious green stone under the subsoil of Boyacá. Most of them work in the mines. The others try to survive “guaqueando” in the valley/ravine of the miner river. If they find an emerald, they are able to buy a house, start a business, travel and even retire forever.

Forty years ago, the so-called “barequeros” were gathering daily by the thousands around the valley in the hope that under the dark soil would arise the stone that would rescue them from their extreme poverty. After environmental laws prohibited the dumping of leftover grit and rocks from the mining excavation into the river, there are only a few dozens of workers who continue to remove the debris with their bare hands.

This practice, which is irresponsible towards the ecosystem and disrespectful towards the future of the mining regions, has taken place all around the world and without control during hundreds of years, ever since mankind began digging the earth to extract its wealth. In the Western Boyacá the uncontrolled digging using heavy machinery has destroyed entire mountains which is the result of the greed of only a few people. However, this digging is also an opportunity for the many guaqueros who have no other means than their own hands to retrieve the precious stone which might have been missed by the miners, to achieve fortune in the form of a green glow.

The labor of the guaqueros arose as an unforeseen side effect but in perfect symbiosis to an unregulated activity which is harmful to the environment. As of today many mines in Colombia still ignore the current legislation which enables the guaqueros who have been stirring the soil already for decades and who depend exclusively on the remains of the mining excavations, to continue their work.

This slowly disappearing group of people currently lives in slums without tap water on the hillside of the mountains that surround the valley. The houses are made of wood and are piled up in steep, winding streets. These settlements do not correspond to any municipality; this is the reason why local administrations do not take care of either the population nor their living conditions.

The other large group that exists in the region are the miners who work in the mines of the Western Boyacá (Mina Real, Peñas Blancas, Cuna, etc.). They receive a small salary which they complement by the “rebusque” (rummage) inside the mines. This practice consists in selling a stone found during their working hours behind the back of their patrons to other intermediaries and thus make easy money. There are also miners who started their own informal excavations and extract stones to sell them in the market of Muzo.

In this system of either legal, regulated or informal activities, the wealth extracted from Colombian mines is very difficult to calculate. The same happens with the value of the emerald itself. Its price is established based on a series of characteristics - color, size, carve and transparency – and varies depending on which hands holds them. It is easier to sell the emeralds in the market if they are already carved, but some buyers prefer the raw, uncut emerald to take care of this delicate process themselves before selling it to international markets. 98% of the Colombian emeralds are destined for export. A country with a poor population that lives on rich soil. 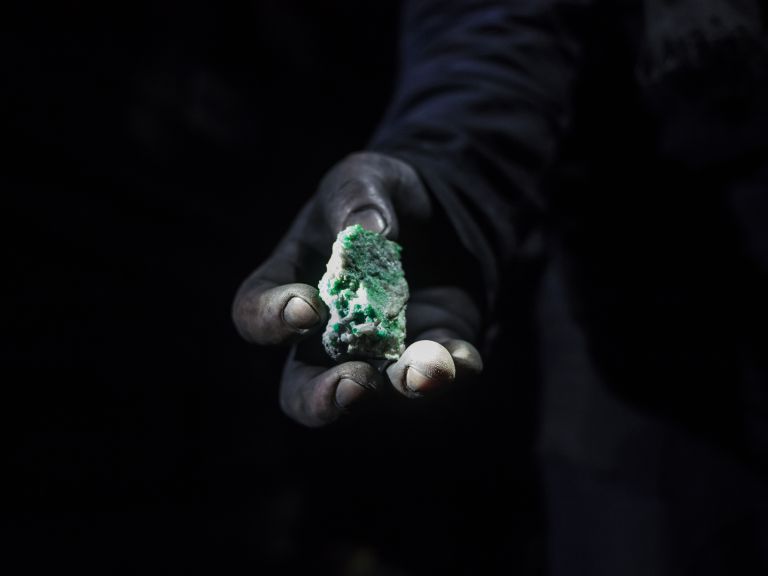 A miner from La Pita (Maripí) shows an emerald rock. Its commercial value is low because the gems t 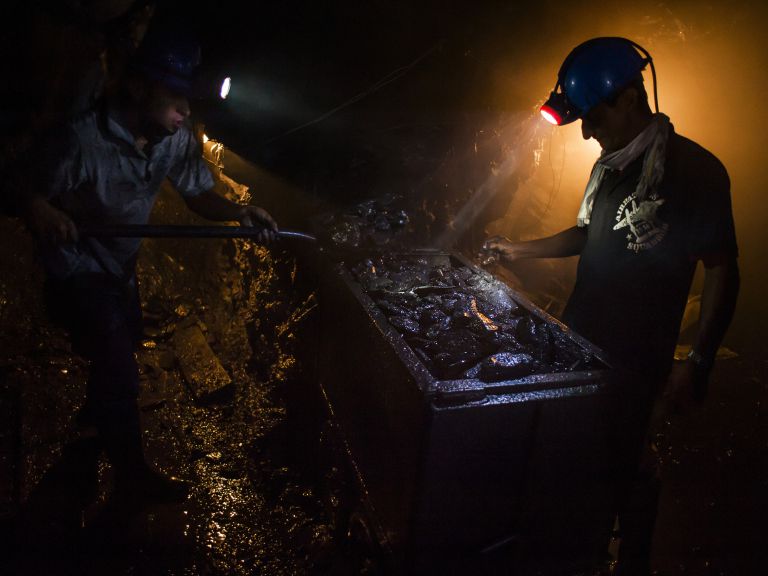 Two miners from an unregulated emerald mine in Pauna, Western Boyacá, examines one of the mine gall 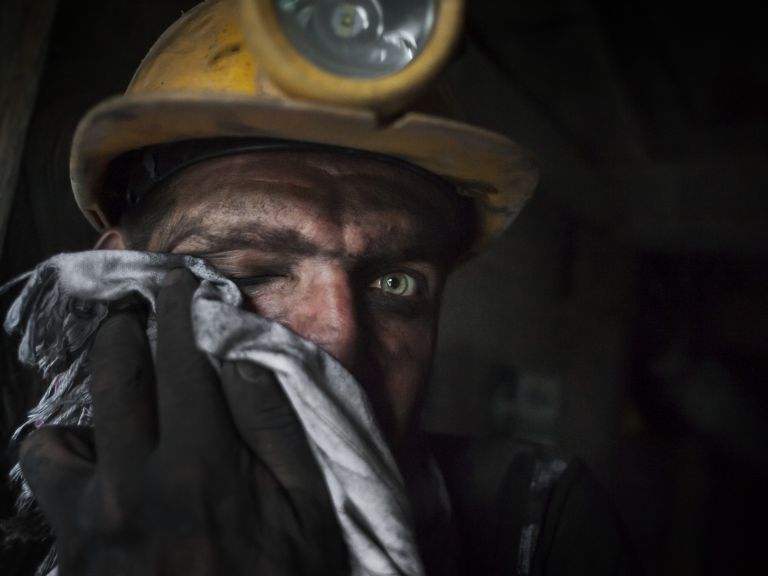 Jorge Gutiérrez works at the mine called La Pita (Maripí). Green eyes identify him as a descendant 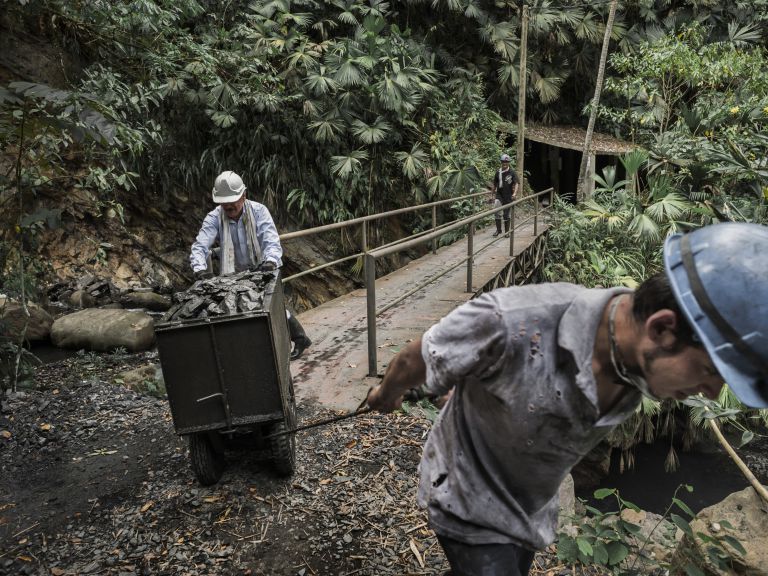 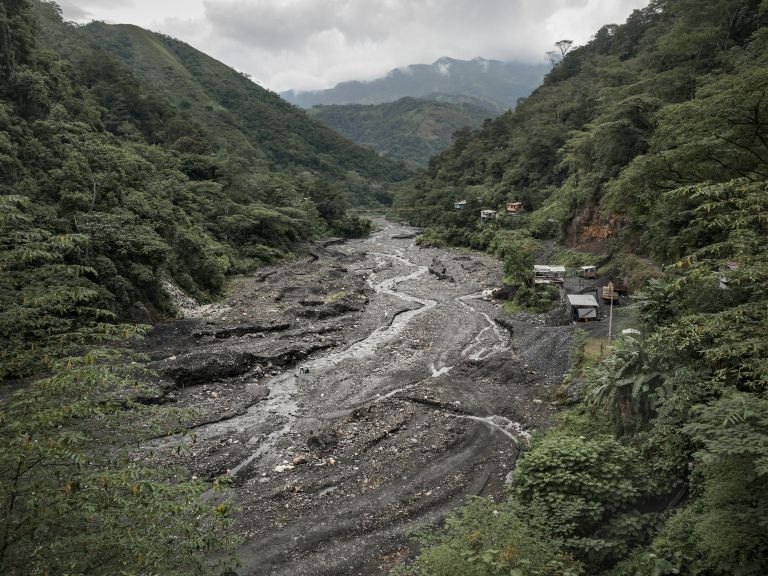 The mining river crosses the West of Boyacá. Different companies extract emeralds from the nearby m 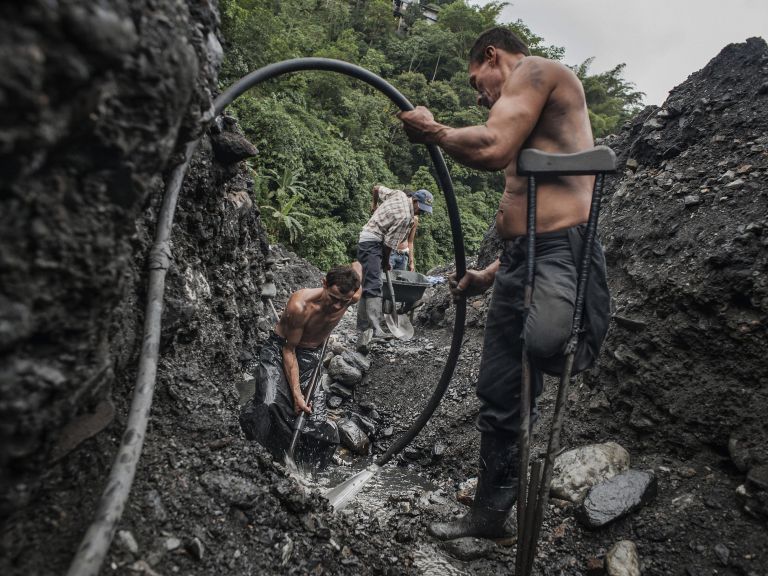 Jaime Vargas lost his leg in an accident working in a mine, since then he dedicates himself to the " 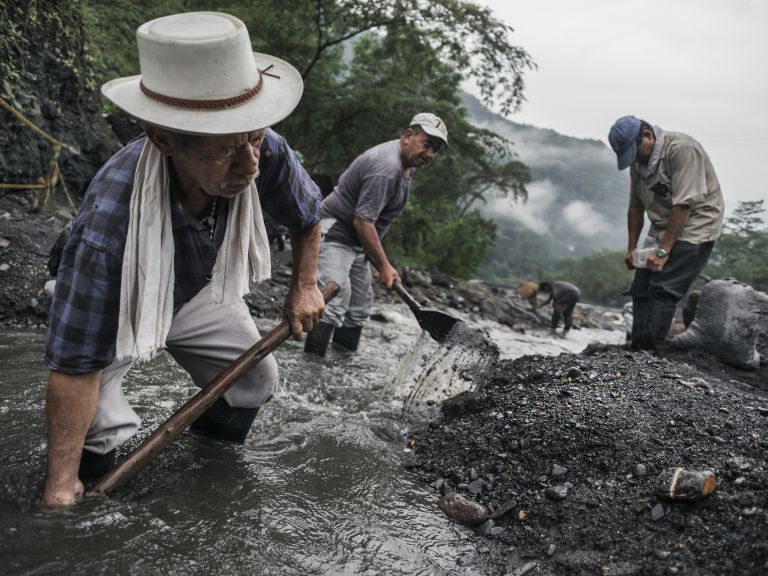 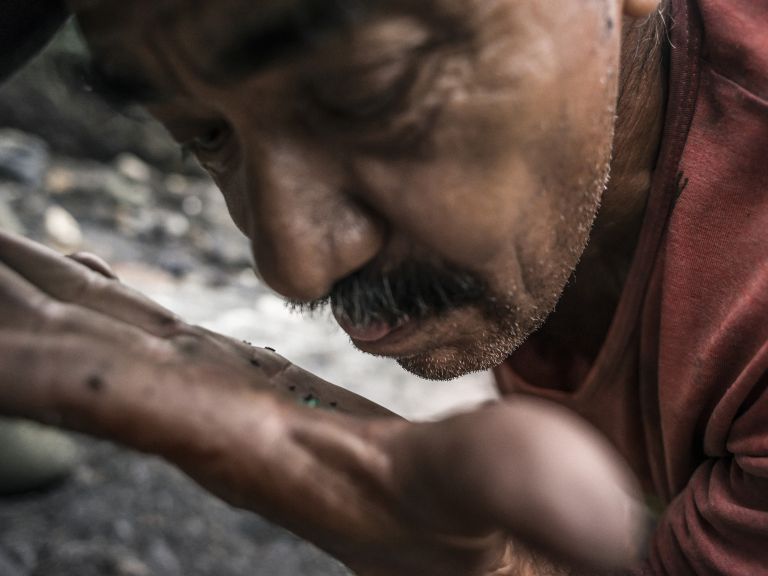 The stones that they can find today in the ravine are small and of a low value. When finally they fi 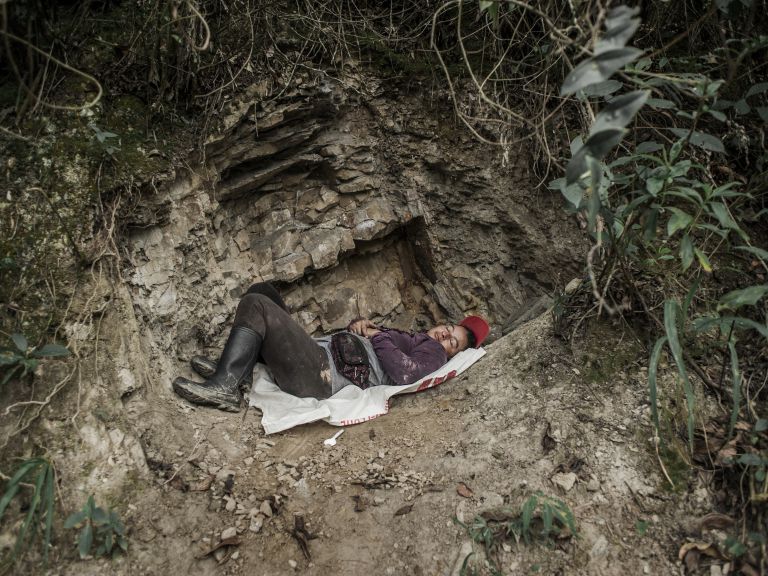 A female barequera rests after having traveled several miles from her house in search of emeralds. 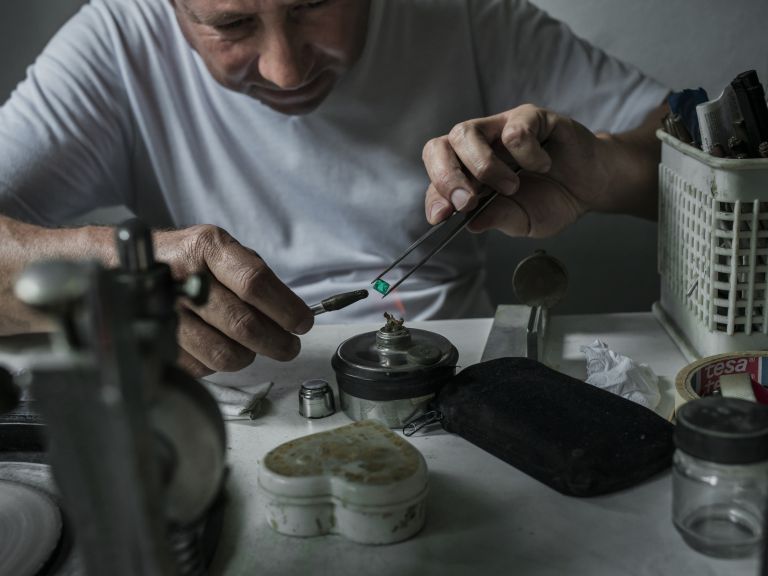 Fredy Mantilla, a carver of Muzo, polishes an emerald in his workshop that is located in his house. 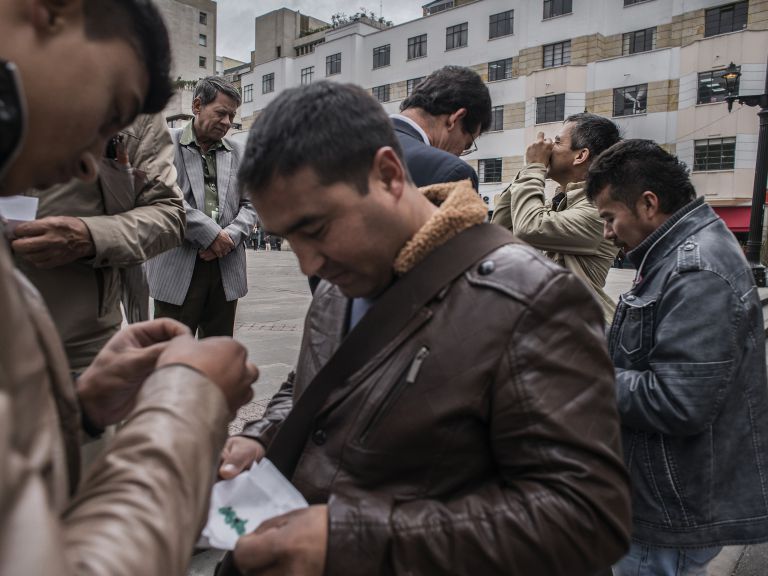 Several merchants and buyers examine emeralds in the Plaza del Rosario, a meeting point for the sale 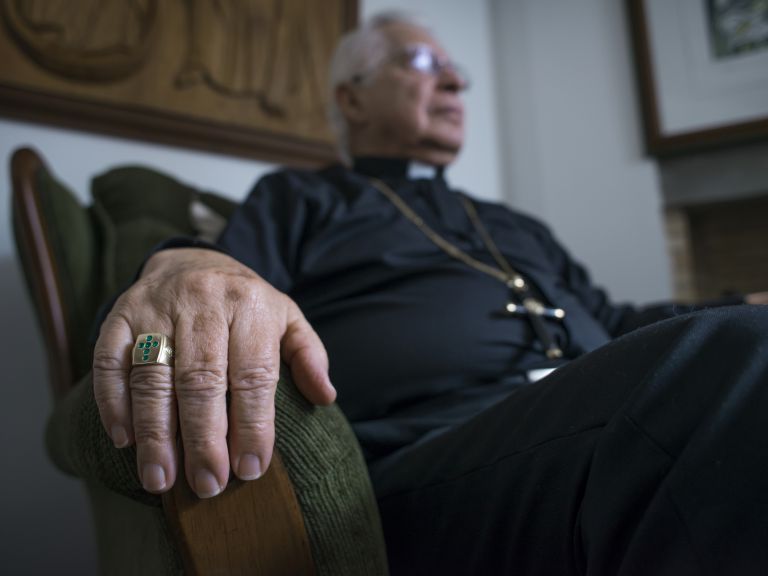